Masscult and Midcult: Essays Against the American Grain (Paperback) 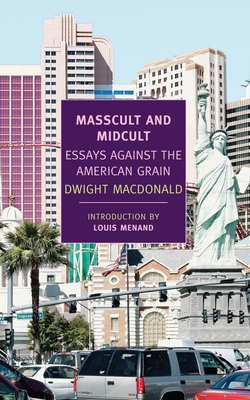 Masscult and Midcult: Essays Against the American Grain (Paperback)

An uncompromising contrarian, a passionate polemicist, a man of quick wit and wide learning, an anarchist, a pacifist, and a virtuoso of the slashing phrase, Dwight Macdonald was an indefatigable and indomitable critic of America’s susceptibility to well-meaning cultural fakery: all those estimable, eminent, prizewinning works of art that are said to be good and good for you and are not. He dubbed this phenomenon “Midcult” and he attacked it not only on aesthetic but on political grounds. Midcult rendered people complacent and compliant, secure in their common stupidity but neither happy nor free.

This new selection of Macdonald’s finest essays, assembled by John Summers, the editor of The Baffler, reintroduces a remarkable American critic and writer. In the era of smart, sexy, and everything indie, Macdonald remains as pertinent and challenging as ever.
Dwight Macdonald (1906–1982) was born in New York City and educated at Exeter and Yale. On graduating from college, he enrolled in Macy’s executive training program, but soon left to
work for Henry Luce at Time and Fortune, quitting in 1936 because of cuts that had been made to an article he had written criticizing U.S. Steel. From 1937 to 1943, Macdonald was an editor
of Partisan Review and in 1944, he started a journal of his own, Politics, whose contributors included Albert Camus, Victor Serge, Simone Weil, Bruno Bettelheim, James Agee, John Berryman, Meyer Schapiro, and Mary McCarthy. In later years, Macdonald reviewed books for The New Yorker, movies for Esquire, and wrote frequently for The New York Review of Books.

John Summers is the editor of The Baffler.

Louis Menand is the Anne T. and Robert M. Bass Professor of English at Harvard University and a staff writer at The New Yorker. He is the author of Discovering Modernism, The Metaphysical Club, American Studies, and The Marketplace of Ideas.
“He was a radical, he was a conservative, he was compassionate, he was scathing. He had exquisite taste in many a literary matter. But his transcendental virtue, that unique quality which sets him far apart from all other literary figures for whom one can feel respect, was that he had the rare gift of always speaking out of his own voice.” —Norman Mailer

“Those who read much and care about the quality of what they read ought to be grateful for the consistent tough-mindedness of Dwight MacDonald. . . He is provocative and well worth rereading. The quality of his essays is in direct ratio to
their ambitiousness.” —Larry McMurtry, The Washington Post

"Dwight Macdonald's...real legacy lies in the series of unforgiving, inflammatory and ferociously witty essays he wrote during the 50s, 60s and 70s. Most of his work is out of print now, but this new collection edited by John Summers aims to right this wrong and prove Macdonald's enduring relevance as a cultural watchdog….If, politically, Macdonald was a confused and often erratic radical, intellectually he was a staunch conservative; he was against the grain in more ways than one. It's this unresolved contradiction that makes his essays so thrilling and complex. " — Ermanno Rivetti, The Guardian

"As with all great essayists, his writing had a poetic component, but it was a poetry cleansed of poeticism. No modern American prose writer of consequence ever postured less: compared with him, Mary McCarthy is on stilts, Gore Vidal grasps a pouncet-box, and Norman Mailer is from Mars in a silver suit. At his best, Macdonald made modern American English seem like the ideal prose medium: transparent in its meaning, fun when colloquial, commanding when dignified, and always suavely rhythmic even when most committed to the demotic." - Clive James, The Atlantic