Soul: And Other Stories (Paperback) 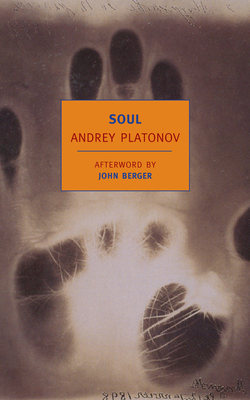 Soul: And Other Stories (Paperback)

The Soviet writer Andrey Platonov saw much of his work suppressed or censored in his lifetime. In recent decades, however, these lost works have reemerged, and the eerie poetry and poignant humanity of Platonov’s vision have become ever more clear. For Nadezhda Mandelstam and Joseph Brodsky, Platonov was the writer who most profoundly registered the spiritual shock of revolution. For a new generation of innovative post-Soviet Russian writers he figures
as a daring explorer of word and world, the master of what has been called “alternative realism.” Depicting a devastated world that is both terrifying and sublime, Platonov is, without doubt, a universal writer who is as solitary and haunting as Kafka.

This volume gathers eight works that show Platonov at his tenderest, warmest, and subtlest. Among them are “The Return,” about an officer’s difficult homecoming at the end of World War II, described by Penelope Fitzgerald as one of “three great works of Russian literature of the millennium”; “The River Potudan,” a moving account of a troubled marriage; and the title novella, the extraordinary tale of a young man unexpectedly transformed by his return to his Asian birthplace, where he finds his people deprived not only of food and dwelling, but of memory and speech.

This prizewinning English translation is the first to be based on the newly available uncensored texts of Platonov’s short fiction.
ANDREY PLATONOV (1899—1951), the son of a metalworker and the eldest of ten children, was born in a village near the Russian town of Voronezh. He began to publish poems and stories in the 1920s and worked as a land reclamation expert in central Russia, where he was a witness to the ravages of the Great Famine. In the 1930s Platonov fell into disfavor with the Soviet government and his writing disappeared from sight.

JOHN BERGER is the author of numerous works of fiction and nonfiction, including To the Wedding, the Into their Labours trilogy, About Looking, Ways of Seeing, and G., for which he won the Booker Prize. His most recent book is Hold Everything Dear: Dispatches on Survival and Resistance. He lives in a small rural community in France.

ROBERT CHANDLER has translated selections of Sappho and Apollinaire and is the editor of Russian Short Stories from Pushkin to Buida. His translations from Russian include Pushkin's Dubrovsky and The Captain's Daughter, Leskov's Lady Macbeth of Mtsensk, Vasily Grossman's Life and Fate and Hamid Ismailo's The Railway. His co-translations of Andrey Platonov have won prizes in the UK and the US. His Alexander Pushkin is published by Hesperus in their series of Brief Lives. He teaches part time at Queen Mary, University of London.

ELIZABETH CHANDLER is a co-translator of several volumes of Platonov and of Pushkin's The Captain's Daughter.

OLGA MEERSON teaches at Georgetown University and is the author of Dostoevsky's Taboos (in English) and Platonov's Poetic of Re-Familiarization (in Russian). She is a co-translator of Platonov's The Foundation Pit and Soul and Other Stories, which, in 2004, was awarded the AATSEEL prize for best translation from a Slavonic language.

"I squint back on our century and I see six writers I think it will be remembered for.  They are Marcel Proust, Franz Kafka, Robert Musil, William Faulkner, Andrey Platonov and Samuel Beckett.... They are summits in the literary landscape of our century ... What's more, they don't lose an inch of their status when compared to the giants of fiction from the previous century."—Joseph Brodsky

"Soul ( New York Review Books ) gathered eight works from another Slavic giant, Andrei Platonov. Works of great tenderness and insight in the face of oppression, they're brilliantly rendered by one of the great translators of our time, Robert Chandler, and his team. It features a striking afterword by John Berger..." --The Guardian

"Andrey Platonov has not yet received the attention he richly deserves here...[he] turns out to be one of the finest writers of the 20th century, worthy to stand alongside Kafka and Joyce. So thanks to NYRB Classics for publishing the Platonov collection Soul, which contains an informatively polemical introduction by Chandler, a smattering of stories ('Among Animals and Plants' appeared last year in The New Yorker), and the short novels 'Soul' and 'The Return.'" --The Arts Fuse

“In Russia it is Platonov who is increasingly described as the best writer of the post-revolutionary epoch.” –Victor Erofeyev, The Times Literary Supplement

"Andrey Platonov is increasingly being recognized, in Russia and elsewhere, as one of the greatest writers of the Soviet period." –The Spectator

“Platonov is a realist as only the Russians can be realists, unsparing and utterly without any literary device except the exact and telling detail. The result seems. . .more myth than reality, as Platonov’s Russia is incredibly strange.” –Guy Davenport

"The most exciting Russian writer to be rediscovered since the end of the Soviet Union." –The Independent (UK)

"In Platonov's prose, it is impossible to find a single inelegant sentence." –The Times (UK)

"In this century the best Russian prose has been written by our poets and Platonov, but he is an exception...Platonov speaks of a nation which in a sense has become a victim of its own language; or, more precisely, he speaks of this language itself which turns out to be capable of generating a fictive world and then falling into grammatical dependence on it." –Joseph Brodsky

“As his versions of Andrey Platonov prove, Robert Chandler is the supreme translator of difficult Russian rose.” –The Literary Review

“Rarely does literture come this close to music.” –The Observer (UK)

"In Soul, Platonov weaves together Sufi philosophy, Persian travelogue, socialist realism, and the language of Soviet bureaucracy into a magical tissue with the luminous, universal quality of myth. Soul is an unforgettably weird retelling of a familiar story: the struggle of an educated young man to assimilate his present with his past." –Elif Batuman, The Daily Beast