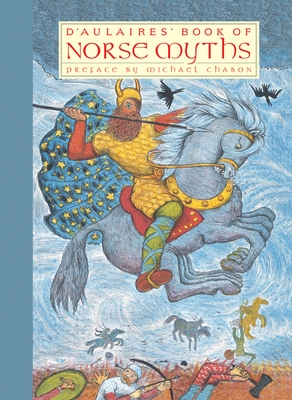 
On Our Shelves Now at:
The Caldecott medal-winning d'Aulaires once again captivate their young audience with this beautifully illustrated introduction to Norse legends, telling stories of Odin the All-father, Thor the Thunder-god and the theft of his hammer, Loki the mischievous god of the Jotun Race, and Ragnarokk, the destiny of the gods. Children meet Bragi, the god of poetry, and the famous Valkyrie maidens, among other gods, goddesses, heroes, and giants. Illustrations throughout depict the wondrous other world of Norse folklore and its fantastical Northern landscape.
Ingri Mortenson and Edgar Parin d’Aulaire met at art school in Munich in 1921. Edgar’s father was a noted Italian portrait painter, his mother a Parisian. Ingri, the youngest of five children, traced her lineage back to the Viking kings.

The couple married in Norway, then moved to Paris. As Bohemian artists, they often talked about emigrating to America. “The enormous continent with all its possibilities and grandeur caught our imagination,” Edgar later recalled.

A small payment from a bus accident provided the means. Edgar sailed alone to New York where he earned enough by illustrating books to buy passage for his wife. Once there, Ingri painted portraits and hosted modest dinner parties. The head librarian of the New York Public Library’s juvenile department attended one of those. Why, she asked, didn’t they create picture books for children?

The d’Aulaires published their first children’s book in 1931. Next came three books steeped in the Scandinavian folklore of Ingri’s childhood. Then the couple turned their talents to the history of their new country. The result was a series of beautifully illustrated books about American heroes, one of which, Abraham Lincoln, won the d’Aulaires the American Library Association’s Caldecott Medal. Finally they turned to the realm of myths.

The d’Aulaires worked as a team on both art and text throughout their joint career. Originally, they used stone lithography for their illustrations. A single four-color illustration required four slabs of Bavarian limestone that weighed up to two hundred pounds apiece. The technique gave their illustrations an uncanny hand-drawn vibrancy. When, in the early 1960s, this process became too expensive, the d’Aulaires switched to acetate sheets which closely approximated the texture of lithographic stone.

In their nearly five-decade career, the d’Aulaires received high critical acclaim for their distinguished contributions to children’s literature. They were working on a new book when Ingri died in 1980 at the age of seventy-five. Edgar continued working until he died in 1985 at the age of eighty-six.

Michael Chabon is the author of several books, including The Mysteries of Pittsburgh, Wonder Boys, The Amazing Adventures of Cavalier and Klay, The Yiddish Policeman’s Union, Manhood for Amateurs: The Pleasures and Regrets of a Husband, Father, and Son and, most recently, Telegraph Avenue.
"…a mythological tour de force."
— The New York Times

"Out of print for many years, Norse Gods and Giants has been very handsomely reissued by the The New York Review Children’s Collection and retitled D’Aulaire’s Book of Norse Myths. Featuring a sturdy sewn binding, the book arguably represents the pinnacle of the d’Aulaires’ achievement as storytellers and artists….the prose seems livelier and more robust in the Norse myths than in the Greek…Their retelling of the Greek myths for children had to pull its punches somewhat….but since sex doesn't feature as prominently in Norse mythology, this book is able to stay scrupulously faithful to the Edda and still maintain its PG rating. But not to worry: there’s still a lot of drinking, fighting and bad behavior, particularly on the part of fiery Thor, who is forever whacking frost giants on the head with his hammer, and the highly entertaining Loki, who is one of the most complicated and devious characters in anybody’s mythology, anywhere. Loki is the Bart Simpson of Norse mythology, forever pulling pranks, forever getting caught and forever talking his way out of the consequences…"
— The New York Times Book Review

"[These] works, especially the books of Norse and Greek myths, were and remain crucial to me, and now to my own children. The interest in mythology that was kindled by those two books has endured throughout my life, and has directly influenced my own writing in countless ways…The Norse book was always my favorite, though. I must have read it a dozen times at least by the time I was nine or ten."
— Michael Chabon