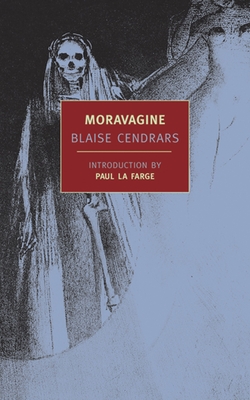 
Not On Our Shelves—Ships in 1-5 Days
At once truly appalling and appallingly funny, Blaise Cendrars's Moravagine bears comparison with Naked Lunch—except that it's a lot more entertaining to read. Heir to an immense aristocratic fortune, mental and physical mutant Moravagine is a monster, a man in pursuit of a theorem that will justify his every desire. Released from a hospital for the criminally insane by his starstruck psychiatrist (the narrator of the book), who foresees a companionship in crime that will also be an unprecedented scientific collaboration, Moravagine travels from Moscow to San Antonio to deepest Amazonia, engaged in schemes and scams as, among other things, terrorist, speculator, gold prospector, and pilot. He also enjoys a busy sideline in rape and murder. At last, the two friends return to Europe—just in time for World War I, when "the whole world was doing a Moravagine."

This new edition of Cendrars's underground classic is the first in English to include the author's afterword, "How I Wrote Moravagine."
Blaise Cendrars (1887–1961) was the pseudonym of Frédéric Sauser, the Swiss son of a French Anabaptist father and a Scottish mother. As a young man he traveled widely, from St. Petersburg to New York and beyond, and these wanderings proved the inspiration of much of his later poetry and prose. Settled in Paris in 1912, Cendrars published two long poems, “Easter in New York” and “The Transsiberian,” which made him a major figure in the poetic avant-garde. At the outset of World War I, he enlisted in the French Foreign Legion, losing an arm in the battle of the Marnes. A prolific poet, Cendrars was also an exceptional novelist, the author of Moravagine, Gold, Rhum, and The Confessions of Dan Yack, among many other books.

Paul La Farge is the author of two novels: The Artist of the Missing, and Haussmann, or the Distinction, which was a New York Times Notable Book for 2001. His third book, The Facts of Winter, was in January 2005.
"Rip-roaring fiction and imaginative adventuring on all planes of experience."
— Times Literary Supplement

"Moravagine seeks damnation and extinction with a glee unequaled in literature. The only parallels that come to mind are Céline and Beckett."
— Sven Birkerts, New Boston Review

"An unbridled picaresque fantasy…full of tenderness, horror, and ink-black jokes of a visual intensity that recall Goya."
— Financial Times