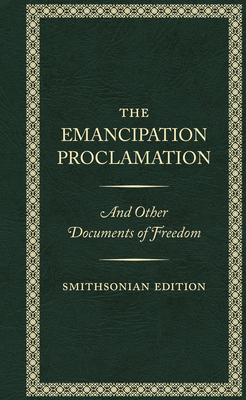 This handsome, pocket-sized Smithsonian edition printed in the United States contains Lincoln's groundbreaking executive order and the writings that helped form it, with features that make it the perfect keepsake:


The edition stands out in the market with an illuminating new introduction from Paul Gardullo, curator at the Smithsonian's National Museum of African American History. His research on the impact of slavery in America's cultural memory contextualizes the historical document as part of a larger cultural narrative, connecting its legacy to modern day.

Abraham Lincoln considered the Emancipation Proclamation the crowning achievement of his presidency, and it is easy to see why. The imperative document freed African Americans enslaved in the Confederate states, transformed the purpose and stakes of the Civil War, and served as a precursor to the Thirteenth Amendment, which would end slavery across the nation. The Emancipation Proclamation was a major turning point in the struggle for African American freedom.
PAUL GARDULLO is a historian and curator at the Smithsonian National Museum of African American History and Culture and director of its Center for the Study of Global Slavery. He also serves as co-director of the Slave Wrecks Project, an international network that investigates the history and afterlives of the global slave trade through the lens of maritime archaeology.