Last Days of the Concorde: The Crash of Flight 4590 and the End of Supersonic Passenger Travel (Air Disasters #3) (Hardcover) 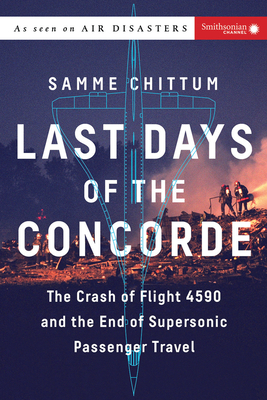 Last Days of the Concorde: The Crash of Flight 4590 and the End of Supersonic Passenger Travel (Air Disasters #3) (Hardcover)

This is book number 3 in the Air Disasters series.

The gripping true tale of a devastating plane crash, the investigation into its causes, and the race to prevent similar disasters in the future.

On July 25, 2000, a Concorde, the world's fastest passenger plane, was taking off from Charles de Gaulle Airport in Paris when it suddenly burst into flames. An airliner capable of flying at more than twice the speed of sound, the Concorde had completed 25 years of successful flights, whisking wealthy passengers--from diplomats to rock stars to corporate titans--between continents on brief and glamorous flights. Yet on this fateful day, the chartered Concorde jet, en route to America, crashed and killed all 109 passengers and crew onboard and four people on the ground. Urgent questions immediately arose as investigators scrambled to discover what had gone wrong. What caused the fire? Could it have been prevented? And, most urgently, was the Concorde safe to fly? Last Days of the Concorde addresses these issues and many more, offering a fascinating insider's look at the dramatic disaster, the hunt for clues, and the systemic overhauls that followed the crash.
SAMME CHITTUM is a narrative journalist and Pulitzer Traveling Fellowship recipient who explores the intersection of current events and history. Her work has been published in the New York Times, the New York Daily News, the New York Post, and the Village Voice. She is also the author of the first two books in the Smithsonian Air Disasters series, The Flight 981 Disaster and Southern Storm.
PUBLISHERS WEEKLY
"[Last Days of the Concorde] proves enlightening about the post-accident investigative process, showing “how happenstance and entropy can conspire to wreak havoc.” Chittum has a gift for making the complex details easily understandable."

"Aviation may well be the most unforgiving of man’s activities. Yet rarely does just one failure or misjudgment cause an airplane to crash; instead it is a chain of events, any link of which might have prevented the disaster. The crash of a supersonic Concorde in France just after takeoff from Charles de Gaulle in Paris on July 25, 2000, is the subject of this excellent book by experienced reporter Samme Chittum, who has a wonderful knack for lucidly explaining tech for the uninitiated. Highly recommended for all aviation professionals and everyone fascinated by man’s reach for the sky." —Stephen Coonts, author of Flight of the Intruder and The Armageddon File

"A tragic crash during takeoff from Paris marked the beginning of the end for the Concorde. Chittum provides a compelling and detailed account of the crash, the ensuing investigation, and what was behind the decision to retire a majestic aircraft that was ahead of its time."—Joe Anselmo, Editor-in-Chief, Aviation Week