Darwin's Fossils: The Collection That Shaped the Theory of Evolution (Paperback) 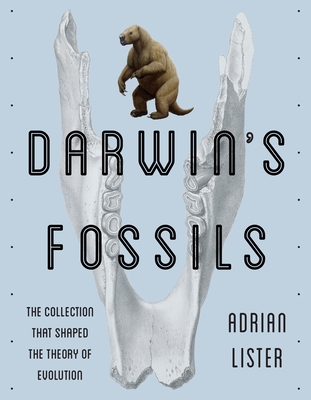 Darwin's Fossils: The Collection That Shaped the Theory of Evolution (Paperback)


Special Order—Subject to Availability
Reveals how Darwin's study of fossils shaped his scientific thinking and led to his development of the theory of evolution.

Darwin's Fossils is an accessible account of Darwin's pioneering work on fossils, his adventures in South America, and his relationship with the scientific establishment.

While Darwin's research on Galápagos finches is celebrated, his work on fossils is less well known. Yet he was the first to collect the remains of giant extinct South American mammals; he worked out how coral reefs and atolls formed; he excavated and explained marine fossils high in the Andes; and he discovered a fossil forest that now bears his name. All of this research was fundamental in leading Darwin to develop his revolutionary theory of evolution.

This richly illustrated book brings Darwin's fossils, many of which survive in museums and institutions around the world, together for the first time. Including new photography of many of the fossils--which in recent years have enjoyed a surge of scientific interest--as well as superb line drawings produced in the nineteenth century and newly commissioned artists' reconstructions of the extinct animals as they are understood today, Darwin's Fossils reveals how Darwin's discoveries played a crucial role in the development of his groundbreaking ideas.
Adrian Lister is a Research Leader in the Earth Sciences Department at the Natural History Museum, London. His research is centred on how ice-age mammal fossils enhance our understanding of processes of evolution and species extinction. He has written many articles and contributes regularly to broadcast media and books.
PUBLISHERS WEEKLY
This is a welcome addition to the ever-growing body of literature dealing with the life and work of Darwin.

BOOKLIST
The voyage Charles Darwin took in 1835 to the Galapagos Islands, where he catalogued a colorful variety of finches, is often cited in books about the groundbreaking scientist’s life as the primary inspiration forhis insights into evolution. Yet Darwin’s five-year journey involved many inland excursions, including three trips to the Andes, where he gathered a treasure trove of fossils that also played an enormous role indeveloping his theories. As a researcher at London’s Natural History Museum as well as a fossil expert, Lister takes advantage of his easy access to much of Darwin’s archive to reveal how indispensable thoseassorted skeletal remains and geological artifacts were to Darwin’s research. Lister recounts Darwin’s fullitinerary in chronology, along with descriptions of key findings during each ground-based expedition, including major discoveries about extinct mammals and coral-reef formation. Richly illustrated withphotos from the fossil collection and line drawings produced when Darwin was alive, Lister’s work is an essential acquisition for every library prizing quality books on evolution.

CHOICE
This work describes Charles Darwin’s five-year journey around the world, the adventure instrumental in the development of his theory of evolution. It focuses on the fossils Darwin discovered and collected and emphasizes their importance in influencing his thinking. The author gives special emphasis to the fossil remains of such extinct mammals as Toxodon, the giant sloth—originally called Megatherium by Darwin. Lister (Natural History Museum, London) relates Darwin’s efforts to ship the collected specimens back to England, with the assistance of people he befriended in South America and associates in London. The storytelling quality and attention to detail in Lister's approach makes this work uniquely compelling. Perhaps the most fascinating illustration—in a book richly illustrated with examples of the places Darwin visited and the fossils he collected—is a reconstruction depicting Darwin in his hammock, slung over the chart table in what served as his cabin aboard the Beagle. Lister offers readers fascinating glimpses of Darwin's daily life at sea. Overall, this account of Darwin’s epochal journey is a fine supplement to previous narratives and will interest general readers as well as historians of natural history.