The Sweat of Their Face: Portraying American Workers (Hardcover) 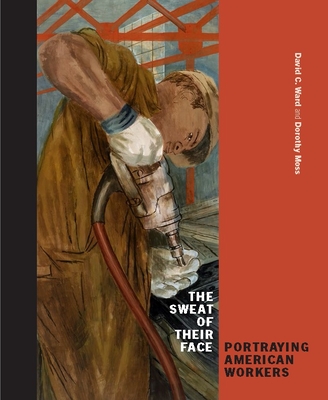 The Sweat of Their Face: Portraying American Workers (Hardcover)


Special Order—Subject to Availability
Work always has been a central construct in the United States, influencing how Americans measure their lives and assess their contribution to the wider society. Work also has been valued as the key element in the philosophy of self-improvement and social mobility that undergird the American value system. Yet work can also be something imposed upon people: it can be exploitative, painful, and hard. This duality is etched into the faces of the people depicted in the portraits showcased in The Sweat of Their Face: Portraying American Workers. This companion volume to an exhibition at the Smithsonian National Portrait Gallery examines working-class subjects as they appear in artworks by artists including Winslow Homer, Elizabeth Catlett, Danny Lyon, and Shauna Frischkorn. This richly illustrated book charts the rise and fall of labor from the empowered artisan of the eighteenth century through industrialization and the current American business climate, in which industrial jobs have all but disappeared. It also traces the history of work itself through its impact on the men and women whose laboring bodies are depicted. The Sweat of Their Face is a powerful visual exploration of the inextricable ties between American labor and society.
DAVID C. WARD is the National Portrait Gallery's senior historian. He has curated exhibitions on Walt Whitman, Abraham Lincoln, American poetry, and the award-winning Hide/Seek: Difference and Desire in American Portraiture. He has also authored several books, including Charles Willson Peale: Art and Selfhood in the Early Republic. DOROTHY MOSS is director of the Outwin Boochever Portrait Competition and curator of painting and sculpture at the National Portrait Gallery. She has contributed to numerous exhibition catalogues, and her articles and essays have been published in the Burlington Magazine, Gastronomica, and American Art.
CHOICE
This is this catalogue for an exhibition running at the National Portrait Gallery through September 2018 featuring paintings, prints, and photographs of Americans at work. As Ward explains in an introduction, this at first seems straightforward. However, he sees the material as paradoxical because it is "impossible to create an authentic portrait of a member of the working or laboring class." Ward sees this impossibility as stemming from the historical connection of portraiture to the upper class and from the reality that workers deny "one's individual selfhood." The greatest strength of the book is the essay by Moss, in which she juxtaposes different artists' works. For example, she pairs Grant Wood's American Gothic (1930) with a compositionally similar 1942 photograph by Gordon Parks of an African American custodian. David Hockney's painting Man in Shower in Beverly Hills (1964) is matched with a 2013 parody of the Hockney work by Ramiro Gomez titled Woman Cleaning Shower in Beverly Hills. An essay by art historian John Fagg about individual and collective labor is also insightful. The book will appeal to those interested in labor as well as to art historians.