Archaeology: The Essential Guide to Our Human Past (Hardcover) 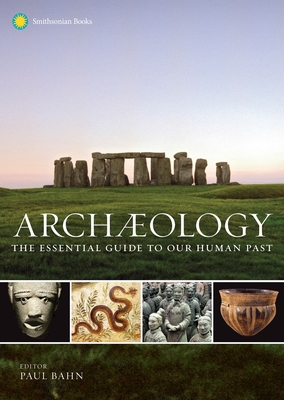 Archaeology: The Essential Guide to Our Human Past (Hardcover)


Not On Our Shelves—Ships in 1-5 Days
Epic in scope, yet filled with detail, this illustrated guide takes readers through the whole of our human past. Spanning the dawn of human civilization through the present, it provides a tour of every site of key archaeological importance. From the prehistoric cave paintings of Lascaux to Tutankhamun's tomb, from the buried city of Pompeii to China's Terracotta Army, all of the world's most iconic sites and discoveries are here. So too are the lesser-known yet equally important finds, such as the recent discoveries of our oldest known human ancestors and of the world's oldest-known temple, Göbekli Tepe in Turkey. A masterful combination of succinct analysis and driving narrative, this book also addresses the questions that inevitably arise as we gradually learn more about the history of our species. Written by an international team of archaeological experts and richly illustrated throughout, Archaeology: The Essential Guide to Our Human Past offers an unparalleled insight into the origins of humankind.
PAUL BAHN is a leading archaeological writer, translator, and broadcaster. He is a contributing editor of Archaeology magazine, and he has written extensively on prehistoric art. He has authored numerous books, most recently Images of the Ice Age.

BRIAN FAGAN is a British-born archaeologist and professor of Anthropology at the University of California, Santa Barbara. He is the author of numerous books on archaeology and ancient climate change. His latest release is The Intimate Bond: How Animals Shaped Human History.
BOOKLIST, STARRED REVIEW
While we are not able to predict with entire clarity where we are going, archaeology allows us to take a ound if not entirely dispassionate look at where we’ve been. It is hard to imagine a more engrossing or horough overview of human history than this volume. Spanning from prehominid beginnings in Africa to he Battle of the Little Bighorn in 1876, Bahn's copiously illustrated, involving, and informative guide iscusses how what we leave behind tells us about how we lived and even how we lived, thought, and orshipped. This reference title's entries are generally two pages in length, with between two-to-six clear lack-and-white photographs.  A description of the site under consideration is given along with what cane deduced from the remains. Photos are analyzed in captions, enhancing the text.  Written by experts in he field, most with university affiliations, the entries are consistent and involving. A final section, “How rchaeology Works,” details changes in methods over time in the areas of surveying, excavation, dating, nd scientific analysis, such as in the use of DNA and site analysis to identify the body of King Richard III f England. The volume concludes with a glossary, a list of contributors, and a detailed, accurate index. An excellent resource for high-school and college students with considerable appeal for the general reader.

LIBRARY JOURNAL
Organized by time period, this book examines major archaeological sites all over the world, from four million years ago to present day. Bahn (Images of the Ice Age) has pulled together a group of top scholars to create a comprehensive look at the science of archaeology. The volume discusses the shortage of places to store excavated materials and the delicate balance between tourism vs. preservation, along with the effects of terrorism on cultural heritage materials. Fascinating and little-considered facts are included in “Focal Points” sections, detailing information on a skull that indicated blunt force trauma believed to be the “earliest known example of lethal interpersonal violence.” At the end of almost all of the entries are “Key Events” in time line form.