The Flight 981 Disaster: Tragedy, Treachery, and the Pursuit of Truth (Air Disasters) (Paperback) 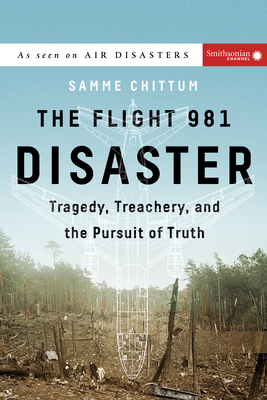 The Flight 981 Disaster: Tragedy, Treachery, and the Pursuit of Truth (Air Disasters) (Paperback)

On June 12, 1972, a powerful explosion rocked American Airlines Flight 96 a mere five minutes after its takeoff from Detroit. The explosion ripped a gaping hole in the bottom of the aircraft and jammed the hydraulic controls. Miraculously, despite the damage and ensuing chaos, the pilots were able to land the plane safely. Less than two years later, on March 3, 1974, a sudden, forceful blowout tore through Turk Hava Yollari (THY) Flight 981 from Paris to London. THY Flight 981 was not as lucky as Flight 96; it crashed in a forest in France, and none of the 346 people onboard survived. What caused the mysterious explosions? How were they linked? Could they have been prevented? The Flight 981 Disaster addresses these questions and many more, offering a fascinating insiders' look at two dramatic aviation disasters.
SAMME CHITTUM is a narrative journalist and Pulitzer Traveling Fellowship recipient who explores the intersection of current events and history. Her work has been published by the New York Times, the New York Daily News, the New York Post, and the Village Voice.
“This is a stunning narrative of an airline disaster narrowly averted and an aircraft maker’s attempt to cover up a fatal flaw.”
—Ashley Halsey III, transportation writer, Washington Post

“Samme Chittum has written a captivating account of an air disaster that, while nearly fifty years old, remains a shocking object lesson for commercial aviation as it enters its second century. The Flight 981 Disaster is a compelling story of greed, lies, hubris, and persistence—an American tragedy that even Euripides could not have made up.”
—Christine Negroni, author, The Crash Detectives: Investigating the World’s Most Mysterious Air Disasters

“Journalist Chittum debuts with a new work in the Smithsonian Air Disasters series, a companion to the titular show on the Smithsonian Channel. The narrative focuses on two aviation disasters involving DC-10 airliners: one in June 1972 outside of Detroit and the other in March 1974, which crashed in a forest in France and left no survivors.[. . .] Chittum has done her research, presenting a good amount of information in a relatively brief work.[. . .] Fans of the series and readers interested in aviation disasters will enjoy the book.”
—Library Journal

“Not only has Chittum created a page-turner with suspenseful, harrowing stories of an air disaster, she also educates readers about the detective work necessary in every air crash investigation. In a book with clear heroes and villains, she emphasizes the high stakes of the struggle between the two by describing the plight of victims and their families. Among the characters who emerge as heroes are journalists, whose investigations surely helped avoid another catastrophe.”
—Linda Shiner, editor, Air & Space/Smithsonian magazine

“The debut volume in Smithsonian's Air Disasters series chronicles an infamous catastrophe in 1974. Wreaking the then-highest single-plane death toll in aviation history (346), its notoriety derived from the investigators’ realization that the cause—the blowout of a cargo door—had happened before on the DC-10. Chittum combines a dramatic rendition of the accident with a clear-eyed account of the commercial, technical, and regulatory trains of events that led to McDonnell Douglas, with the approval of the FAA, putting into service a passenger plane with an Achilles heel. Intended as the company’s jumbo-jet answer to rival Boeing’s 747, the DC-10 was designed quickly and with great pressure on the engineers to lower its weight. For the cargo door, they selected a lighter electrical-locking mechanism over a heavier but tried-and-true hydraulic closing system. Explaining how neither cockpit crew nor baggage handlers physically closing the door could be certain it had locked, Chittum describes the explosive revelation of the defective door in a 1972 flight. In that blowout, the pilots mastered the crisis and landed safely. Incredibly, the fix then ordered on all DC-10s was not performed on the one that crashed two years later. Assembling this tale of human and regulatory error, Chittum proves to be a perfect captivator of the aviation audience.” -Booklist

Chittum, a narrative journalist, tells the story of two plane crashes, both involving the passenger jet DC-10. The cause of both crashes was the jet's faulty cargo door design: instead of the typical plug-type doors that self-sealed when the aircraft was pressurized, the DC-10's door was secured by an electric motor. Chittum begins with the heroic account of American Airlines Flight 96, which pilot Bryce McCormick managed to land safely after the cargo door blew out in 1972. Two years later, a similar malfunction ended in tragedy. Turkish Airlines Flight 981 had just taken off from Paris when the cargo door failed, resulting in a violent crash and the deaths of all 346 people on board. The narrative reads like a novel, complete with dynamic characters and gripping plot lines. Chittum skillfully weaves aeronautics science and commercial aviation history into her accounts of the events leading up to the crashes and subsequent investigations. While the book includes an annotated list of sources, it would have benefited from the addition of photographs or drawings to illustrate the various mechanisms in play. Regardless, this is an engaging, accessible read. -Choice