With Schwarzkopf: Life Lessons of The Bear (Hardcover) 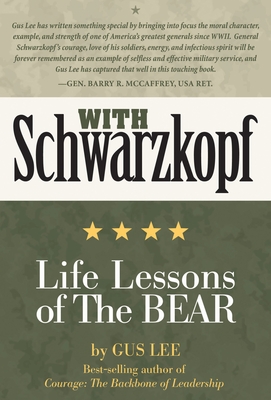 With Schwarzkopf: Life Lessons of The Bear (Hardcover)


Special Order—Subject to Availability
With Schwarzkopf is Gus Lee's remembrance of his mentor and friend H. Norman Schwarzkopf, and his firsthand account of how Schwarzkopf shaped his life. In 1966, Lee, a junior-year cadet at West Point, was bright, athletic, and popular. He was also on the verge of getting kicked out. Nearing the bottom of his class due to his penchant for playing poker and reading recreationally instead of studying engineering, he was assigned a new professor: then-Major Norman Schwarzkopf. Schwarzkopf's deeply principled nature and fierce personality took hold of the wayward cadet, and the two began meeting regularly and discussing what it meant to be a scholar, a soldier, and a man.

Lee's vibrant, witty narrative brings his more than forty-year relationship with Schwarzkopf to life. Readers get an inside look at West Point culture; they see Schwarzkopf's bristling anger with his rebellious pupil as well as his tenacity, intellect, and moments of surprising emotional warmth; and they watch as Lee starts to absorb his teachings. As he left West Point and took on more professional and personal roles, Lee approached every crisis or difficult decision by channeling his mentor. Over the years, Schwarzkopf's instilled values, wise counsel, and warm conversations shaped Lee and brought the two together in an unlikely friendship. In With Schwarzkopf, Lee passes along the lessons he learned so future generations can hear Schwarzkopf's important teachings.
GUS LEE is an ethicist, character-based leadership authority, and author of several best-selling books, including China Boy and Courage: The Backbone of Leadership. He was the chair of character development at the United States Military Academy at West Point, where he was mentored as a cadet by H. Norman Schwarzkopf.
Gus Lee captures the essence of true mentorship in this book. Regardless of the professional discipline, Lee illustrates that caring leaders who nurture those under their charge will set the conditions for long-term success in any organization. – Lt. Gen. Robert Caslen

Gus Lee has written something special by bringing into focus the moral character, example, and strength of one of America’s greatest generals since WWII. General Schwarzkopf’s courage, love of his soldiers, energy, and infectious spirit will be forever remembered as an example of selfless and effective military service, and Gus Lee has captured that well in this touching book. – Gen. Barry R. McCaffrey, Ret.

Norman Schwarzkopf was the ultimate example of the teachings of West Point—Duty, Honor and Country. He believed in and lived those values. Everyone should read With Schwarzkopf to understand the meaning of integrity and patriotism. – Al Worden, Apollo 15 astronaut, USMA class of '55