American Enterprise: A History of Business in America (Hardcover) 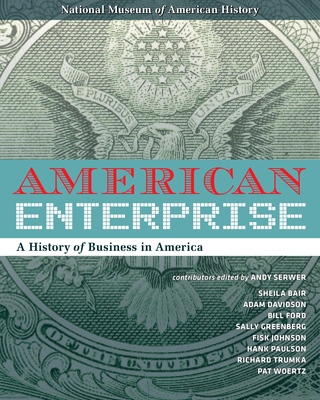 American Enterprise: A History of Business in America (Hardcover)

What does it mean to be an American? What are American ideas and values? American Enterprise, the companion book to a major exhibition at the Smithsonian’s National Museum of American History, aims to answer these questions about the American experience through an exploration of its economic and commercial history. It argues that by looking at the intersection of capitalism and democracy, we can see where we as a nation have come from and where we might be going in the future.

Richly illustrated with images of objects from the museum’s collections, American Enterprise includes a 1794 dollar coin, Alexander Graham Bell’s 1876 telephone, a brass cash register from Marshall Fields, Sam Walton’s cap, and many other goods and services that have shaped American culture. Historical and contemporary advertisements are also featured, emphasizing the evolution of the relationship between producers and consumers over time. Interspersed in the historical narrative are essays from today’s industry leaders—including Sheila Bair, Adam Davidson, Bill Ford, Sally Greenberg, Fisk Johnson, Hank Paulson, Richard Trumka, and Pat Woertz—that pose provocative questions about the state of contemporary American business and society. American Enterprise is a multi-faceted survey of the nation’s business heritage and corresponding social effects that is fundamental to an understanding of the lives of the American people, the history of the United States, and the nation’s role in global affairs.

ANDY SERWER is the editor-in-chief of Yahoo Finance. He was formerly the managing editor of Fortune magazine, as well as a regular contributor on CNN's "American Morning" and a co-host of CNN's "In the Money." DAVID K. ALLISON, NANCY DAVIS, KATHLEEN G. FRANZ, and PETER LIEBHOLD are curators at the Smithsonian National Museum of American History.
KIRKUS REVIEW


The Smithsonian's National Museum of American History provides an illustrated overview of the country's business history, including images of objects and artifacts in the museum's collections.
The editors, Serwer, a former editor at Fortune magazine, and Liebhold, a curator at the museum, are joined by eight contributors from business, commerce, finance and government service. These include former treasury secretary and Goldman Sachs veteran Hank Paulson, Richard Trumka of the United Mine Workers Union, Bill Ford of the motor company, and Fisk Johnson, the fifth generation of the family in charge of SC Johnson. The editors identify four successive phases of business organization. Small businessmen and family businesses organized around trades and crafts characterized the Merchant Era, from 1770 to the 1850s. The Corporate Era (1860s-1930s) was based on the growth of industrialization, increasing capital and power, investors and limited liability. Contributor Adam Davidson, of the New York Times Magazine, writes that this period “represents a defining break between an old way of living and the new one we now know.” The editors divide the decades from the close of World War II to the present between the Consumer Era and the Global Era. The book covers the proliferation of slavery and the China trade, along with the development of the oil industry, advertising and the explosive rise of digital technology in the past few decades. The most interesting parts of the narrative are the pictures of the objects in the museum’s collection—e.g., a Singer sewing machine, an Underwood typewriter, a Bell telephone, a 1914 cash register from Marshall Field & Company in Detroit and a DuMont “Revere” entertainment center from 1947. Paulson concludes with a two-part contribution on global warming, noting that even though “we can see the crash coming…we're sitting on our hands instead of altering course.”

An attractively presented guide and showcase to the museum and to business history.