Math and the Mona Lisa: The Art and Science of Leonardo da Vinci (Paperback) 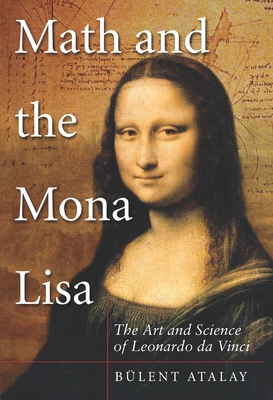 Math and the Mona Lisa: The Art and Science of Leonardo da Vinci (Paperback)


Special Order—Subject to Availability
Leonardo da Vinci was one of history's true geniuses, equally brilliant as an artist, scientist, and mathematician. Readers of The Da Vinci Code were given a glimpse of the mysterious connections between math, science, and Leonardo's art. Math and the Mona Lisa picks up where The Da Vinci Code left off, illuminating Leonardo's life and work to uncover connections that, until now, have been known only to scholars.

Bülent Atalay, a distinguished scientist and artist, examines the science and mathematics that underlie Leonardo's work, paying special attention to the proportions, patterns, shapes, and symmetries that scientists and mathematicians have also identified in nature. Following Leonardo's own unique model, Atalay searches for the internal dynamics of art and science, revealing to us the deep unity of the two cultures. He provides a broad overview of the development of science from the dawn of civilization to today's quantum mechanics. From this base of information, Atalay offers a fascinating view into Leonardo's restless intellect and modus operandi, allowing us to see the source of his ideas and to appreciate his art from a new perspective.
Bülent Atalay, a professor of physics at Mary Washington College, an adjunct professor at the University of Virginia, and a member of the Institute for Advanced Study, Princeton, is also an accomplished artist whose lithographs have been published in Lands of Washington and Oxford and the English Countryside. He lives in Virginia.
“The broad sweep of Professor Atalay's brilliant mind brings us an approach to understanding the Vincian genius that is so insightful, so original, and so well-reasoned that it immediately becomes an essential volume in the canon of Leonardiana. I read this monumental achievement in awe of the author's perceptions.”—Sherwin Nuland, author of Leonardo da Vinci and winner of the 1994 National Book Award for How We Die.

“A masterful examination of the differences and similarities in the sciences and the arts, as embodied by that genius of both fields: Leonardo da Vinci. Professor Bülent Atalay has penetrated Leonardo's mind, in a way that is both highly readable and very informative.”—Jamie Wyeth

“Bülent Atalay takes us on a delightful romp through millenia and across continents, bringing together art, architecture, science, and mathematics under the umbrella of Leonardo's genius. His writing is informed by his artist's eye for beauty, his historian's appreciation of context, and his scientist's love of order and symmetry. I read Atalay's description of Leonardo's The Last Supper not long after having visited the masterpiece in Milan, for the first time since its restoration. His words added an unexpected poignancy to that sublime experience. Leonardo is the prototype for the renaissance man—artist, architect, philosopher, scientist, writer. There are few like him today, but Atalay is indeed a modern renaissance man, and he invites us to tap the power of synthesis that is Leonardo's model.”—William D. Phillips, winner of the 1997 Nobel Prize in Physics.