A History of Life in 100 Fossils (Hardcover) 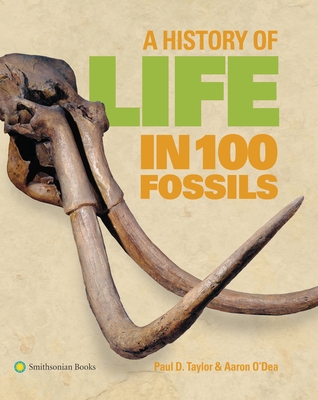 A History of Life in 100 Fossils (Hardcover)


Special Order—Subject to Availability
A History of Life in 100 Fossils showcases 100 key fossils that together illustrate the evolution of life on earth. Iconic specimens have been selected from the renowned collections of the two premier natural history museums in the world, the Smithsonian Institution, Washington, and the Natural History Museum, London. The fossils have been chosen not only for their importance in the history of life, but also because of the visual story they tell. This stunning book is perfect for all readers because its clear explanations and beautiful photographs illuminate the significance of these amazing pieces, including 500 million-year-old Burgess Shale fossils that provide a window into early animal life in the sea, insects encapsulated by amber, the first fossil bird Archaeopteryx, and the remains of our own ancestors.
PAUL D. TAYLOR has worked in the Department of Paleontology at the Natural History Museum, London, for 30 years, heading the Invertebrate and Plants division between 1990 and 2003. His research focuses on fossil and living bryozoans, with subsidiary interests in evolution, paleoecology, and fossil folklore. He is the author of Fossil Invertebrates. AARON O'DEA is an Associate Staff Scientist at the Smithsonian Tropical Research Institute in Panama. He uses the fossil record to understand past climactic changes in the seas and their role in extinction and speciation, and how life in the past can help us predict the future.
PUBLISHERS WEEKLY

Through a combination of informative text and striking pictures, Taylor and O'Dea, of the Natural History Museum, London, and the Smithsonian Tropical Research Institute, respectively, present an overview of the evolution of life on Earth. Using some of the notable fossils present in the collections of the Natural History Museum and the Smithsonian, they describe life forms ranging from 3.5 billion-year-old cyanobacteria to the Stellar's sea cow, which was driven to extinction in the late 18th century. Each picture is coupled with a brief description and readers are treated to a discussion of what evolutionary lessons can be learned from each fossil. (The book's only major downside is that the fossils are presented without a clear indication of scale, so it is difficult to appreciate size differences.) In addition to such standard fare as descriptions of how Archaeopteryx displays both bird and reptile characteristics, the authors go further afield, demonstrating, for example, that grasses were common many millions of years earlier than originally hypothesized. The fossils Taylor and O'Dea present lead them to wonder about such issues as the nature of symbiosis or whether all dinosaurs were warm-blooded, using their material like any good scientist: to ask as many questions as they answer. (Oct.)

As intriguing remnants of the geologic past, every fossil tells a story about the evolution of life on Earth. Paleontologist Taylor (Natural History Museum, London) and paleobiologist O’Dea (Smithsonian Tropical Research Inst., Panama) have assembled information on 100 fossils that showcases the enormous diversity of life forms that have come and gone since life began in the seas 3.5 billion years ago. For each fossil there is a photograph accompanied by a lively single-page essay describing the organism’s anatomical features, diet, lifestyle, taxonomic classification, and evolutionary significance. With only ten fossil plants included, the collection is heavily weighted toward animal species. Although the photographs are of high quality, labeling of each fossil’s prominent features would have been helpful for understanding the configuration of less familiar species; a scale of measurement would have been handy as well. VERDICT From single-celled foraminifera to gigantic steppe mammoths, this volume presents a sweeping panorama of ancient life and is recommended for nonspecialists interested in paleontology or evolutionary biology. A solid companion to Donald Prothero’s Evolution: What the Fossils Say and Why It Matters.--Cynthia Lee Knight, formerly with Hunterdon Cty. Lib., Flemington, NJ

This beautifully illustrated volume is a showcase of representative fossils through geologic time. It is a gallery of stunning double-page spreads and an example of fine book design.  The spectacular images are paired with informative and insightful text provided by Taylor (Natural History Museum, London) and O’Dea (Smithsonian Tropical Research Institute, Panama).  The fossils depicted are primarily specimens held by the authors’ respective parent institutions, supplemented by a few from other museums.  If these fossils are not already iconic, they ought to be.  A section in the back of the book gives further details about the actual specimens for interested readers.  The essays are erudite, but not technical.  The fossils provided inspiration for the authors to muse on many aspects of evolution, geologic change, and the diversity of life over time.  Their prose is further enlivened by accounts of the colorful historical personalities who made key discoveries.  Each essay and photo is used as an opportunity to illustrate at least one major concept in paleobiology.  It is a perfect book for public libraries.
--W. L. Cressler III, West Chester University of Pennsylvania
Summing Up: Highly recommended. General readers and lower-division undergraduates.