The American Vice Presidency: From Irrelevance to Power (Hardcover) 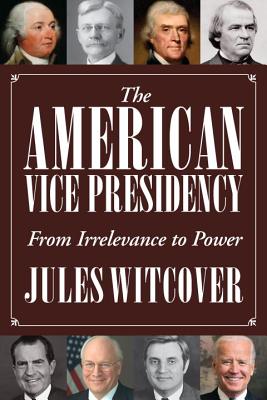 The American Vice Presidency: From Irrelevance to Power (Hardcover)

The American Vice Presidency is an all-inclusive examination of the vice presidency throughout American history. Acclaimed political journalist and author Jules Witcover chronicles each of the 47 vice presidents, including their personal biographies and their achievements--or lack thereof--during their vice presidential tenures. He explores how the roles and responsibilities were first subject to the whims of the presidents under whom they served, but came in time to be expanded by enlightened chief executives and the initiatives of the vice presidents themselves. Constitutionally assigned only to preside over the Senate as they stand by to fill a presidential vacancy, early vice presidents were left to languish in irrelevance and ineffectiveness; only in recent decades have vice presidents received--or taken--more power. In particular, Walter Mondale, Al Gore, Dick Cheney, and Joe Biden have undertaken greater and more significant responsibilities. Witcover reports the political maneuvering and manipulation that transformed the vice presidency from mere consolation prize to de facto assistant presidency. The American Vice Presidency, an insightful, revealing look at this oft-dismissed office, is a must-have for lovers of behind-the-scenes political history.

JULES WITCOVER is a syndicated political columnist who has worked for the Baltimore Sun, Washington Post and Star and the Los Angeles Times. He is author of fourteen books on American politics and history and co-author of five others. They include biographies of vice presidents Spiro Agnew and Joe Biden, a history of the Democratic Party, and accounts of five presidential campaigns.

This is the ultimate veepstakes book! Witcover shows that behind every vice president there is a fascinating political story, from those who got there through cold political calculation to accidental vice presidents like George Dallas, who was chosen as James Polk's running mate only after seven other men turned Polk down. Witcover writes with clarity and vibrancy, presenting a history of the United States through the eyes of our vice presidents.

There is no better person to write a history of the vice presidency and the people who have held the office than Jules Witcover. Over a long and distinguished career, Witcover has assembled a vast body of work about political campaigns, presidents and vice presidents—in newspaper stories, columns, magazine articles and a steady stream of notable books. This latest book is a comprehensive and readable guide to an office that once was considered a backwater post but has since become a source of considerable power and influence.

Dan Balz, Washington Post political correspondent and author of Collision 2012: Obama vs. Romney and the Future of Elections in America

What a delightful book! Jules Witcover blends the insights of a top-flight political reporter with the wisdom of a historian to produce an indispensable guide to the vice presidency. All political junkies need this readable survey in their personal library.

A veteran journalist who has published copiously about the vice presidency offers an exhaustive survey.

Syndicated politics columnist Witcover (Joe Biden: A Life of Trial and Redemption, 2010, etc.) relates the saga of all 47 vice presidents of the United States, from John Adams to Joe Biden. Although biographical information is abundant for each man, the author emphasizes the political context of each vice presidency, showing how each vice president became the nominee, whether each worked well in tandem with the president, and what happened to each when the four-year term expired. Only readers who have studied the White House in depth are likely to recognize names such as William R. King, Garret A. Hobart and Charles Curtis. Witcover explains why most vice presidents, despite impressive accomplishments before election, served their terms in near obscurity. The inattention of the Senate, the U.S. House of Representatives and the courts regarding sensible selection and succession procedures seems shocking when understood within the historical timeline Witcover presents. At first, the vice president was the runner-up in the election for president, meaning incompatible rivals might be thrown together. Later, tradition dictated the president and the vice president be from the same political party, but the line of succession remained unclear. In one of the most surprising chapters, Witcover examines the confusion in the mind of Thomas R. Marshall during the extended, mostly undisclosed incapacity of President Woodrow Wilson. Wilson's wife and the medical staff refused to keep Marshall in the loop, despite the strong possibility that Marshall would become president. Not until 1967, with the adoption of the 25th Amendment, did the procedure for filling a vacant presidency become completely clear. That amendment became operative only six years later, when the disgraced Richard Nixon chose Gerald Ford as the new president. In a final chapter, Witcover looks back on the evolution of the vice presidency to surmise that it now can probably be considered an "assistant presidency" rather than a do-nothing sinecure.

For most of our history, the office of vice president has been viewed as a powerless and frustrating position, often derided even by those who held it. In declining nomination for it, Daniel Webster compared it to being buried alive. John Nance Garner famously declared it was worth less than "a bucket of warm spit." Early in our republic, Adams, Jefferson, and Aaron Burr exercised some influence upon intraparty machinations but little upon executive policy. Many vice presidents were unwisely kept ignorant of critical issues; for example, Truman regarding the Manhattan Project. Celebrated journalist Witcover indicates how recent decades have seen a dramatic increase in the status and power of the office. Using several living former vice presidents as sources, Witcover illustrates how these men consistently expanded their power and influence, to the point where the office was arguably the second most powerful in the executive department. Yet the office remains constitutionally weak, and one must still conclude that an individual vice president has only the power the president is willing to grant. This is a well done and very informative survey of the careers of all the men who filled the office. Copyright 2014 Booklist Reviews.

While U.S. presidential names usually bring to mind facts for history buffs to reflect on, vice presidents, such as -Schuyler Colfax and Garret Hobart may be total strangers, despite having been, at one time or another, next in line to lead the nation. Witcover, a political columnist (Baltimore Sun, Washington Post, Los Angeles Times) and author (The Making of an Ink-Stained Wretch; Party of the People), introduces every U.S. vice president chronologically, from John Adams to Joe Biden. The majority of the 47 essays run from six to 11 pages in length and cover boyhood and education, family life, entry into politics, and highlights (and low points, in some cases) of the man’s time in office. In the book’s introduction and concluding notes, Witcover outlines the evolution of the vice presidency, an office that was originally held by the person who got the second-most votes in the election, without regard to specific political goals or the working relationship between him and the president. The author’s essays show the progression toward choosing a party ticket, one that is meant to feature true political partners and meaningful vice presidential responsibilities. He documents the many biographies and political histories he consulted, along with Mark Hatfield’s Senate Historical Office biographies (available online at senate.gov) and occasional personal interviews. VERDICT The essays included here are well-rounded, concise perspectives of the vice president’s time in office, and in many cases, his pursuits after leaving that position. Adults and motivated high school students could pick and choose from among the entries or read straight through for an inside view of an oft-overlooked position.—Maggie Knapp, Trinity Valley Sch., Fort Worth, TX

Veteran journalist Jules Witcover’s comprehensive new book on the vice presidency will tell readers everything they wanted to know about the 47 U.S. vice presidents — and then some more.

It is no surprise that Witcover would write this book – after all, he has published full-length biographies of vice presidents Spiro T. Agnew and Joseph R. Biden Jr. But my goodness – the amount of research Witcover had to conduct to publish this book is astounding... Serious scholars of American history will learn a lot. So will trivia buffs. And everybody else.