The Jefferson Bible, Smithsonian Edition: The Life and Morals of Jesus of Nazareth (Hardcover) 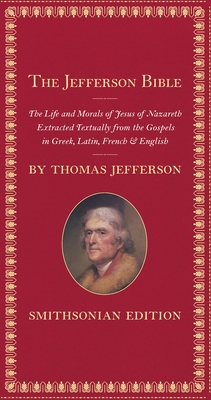 The Jefferson Bible, Smithsonian Edition: The Life and Morals of Jesus of Nazareth (Hardcover)


Special Order—Subject to Availability
The Jefferson Bible, or The Life and Morals of Jesus of Nazareth as it is formally titled, was Thomas Jefferson's effort to extract what he considered the pertinent doctrine of Jesus by removing sections of the New Testament containing supernatural aspects as well as perceived misinterpretations he believed had been added by the Four Evangelists. Using a razor, Jefferson cut and arranged selected verses from the books of Matthew, Mark, Luke, and John in chronological order, mingling excerpts from one text to those of another in order to create a single narrative. After completion of The Life and Morals, about 1820, Jefferson shared it with a number of friends, but he never allowed it to be published during his lifetime. The most complete form Jefferson produced was inherited by his grandson, Thomas Jefferson Randolph, and was published in 1895 by the National Museum in Washington.

Once published in black-and-white facsimile by the Government Printing Office in 1900 as a gift for new members of Congress, the Jefferson Bible has never before been published in color in its complete form. The Jefferson Bible, Smithsonian Edition is an exact facsimile reproduction based on the original copy in the Smithsonian collections. The Jefferson Bible, Smithsonian Edition is as beautiful an object as was so painstakingly crafted by Thomas Jefferson himself.
THOMAS JEFFERSON, third president of the United States, most wanted to be remembered as the author of the Declaration of American Independence, of the Statute of Virginia for Religious Freedom, and father of the University of Virginia. The author lives in Charlottesville, Virginia.
LIBRARY JOURNAL, Starred Review

This is a painstakingly produced full-color facsimile of the original volume that Jefferson created, now at the Smithsonian, where it received top-level conservation treatment prior to its high-resolution reproduction here. Jefferson created his version of the New Testament by cutting and pasting from Greek, Latin, French, and English printed texts of the Gospels, which he placed in four parallel columns and accompanied with his marginal notes. This edition also contains two essays: "The History of the Jefferson Bible," in which curators at the Smithsonian's National Museum of American History explain Jefferson's intent and his methods, and an essay on the volume's extensive conservation. The passages that Jefferson selected and pasted together present a much-edited, single chronological account of Jesus's life, teachings, and death—ending with Jesus's burial and avoiding redundancies. The passages are those that Jefferson deemed to be supportable by reason. The "History" essay draws parallels between the way Jefferson revised Virginia's laws and the way he revised the Bible. VERDICT Jefferson's Bible has been published before, but never in full facsimile with all its contents. With great cultural importance for all readers from preteens through scholars in American studies, biblical studies, or the Enlightenment, as well as general readers. Also a handsome gift.—Carolyn M. Craft, formerly with Longwood Univ., Farmville, VA

The most famous single book in America was recently taken apart and put back together to retard its further deterioration. In the process, it was digitally photographed cover to cover, which is why this edition exists. Better than those based on normal photography, this full-color reproduction of The Life and Morals of Jesus of Nazareth Extracted Textually from the Gospels in Greek, Latin, French & English, as its compiler, Thomas Jefferson, calls it on the handwritten title page, shows what it really looks like. As the three authors of the accompanying essays on the history and the conservation of the DIY parallel-text edition concur, its tidiness is a tribute to the third president’s steady hand and keen eye at age 77. Intellectually, it embodies his rationalist respect for Christianity as a moral system, not a religion. Excluding everything miraculous in the Gospels, thereby sifting, Jefferson said, “diamonds” from “a dunghill,” it establishes that one Founding Father, at least, was not a biblical inerrantist. A lovely addition to thoroughgoing Americana collections.— Ray Olson

In 1820, former president Thomas Jefferson completed The Life and Morals of Jesus of Nazareth. Popularly known as "Jefferson's Bible," it comprises 82 pages, each with the Greek, Latin, French, and English texts of the New Testament passages that Jefferson viewed as authentic purveyors of Jesus's life and ethical teachings. Jefferson literally cut and pasted this material onto blank sheets of paper. Casting out all passages that were, in his opinion, contrary to reason, he ended up with the one form of religion in which he believed. The largest part of this 2011 book is an exquisitely reproduced full-color facsimile of this older work--the result of painstaking efforts by conservators at the Smithsonian and elsewhere, described in considerable detail in a chapter titled "Conservation." A preceding chapter, "History of the Jefferson Bible," puts this work within the context of Jefferson's life and the lives of contemporaries such as Benjamin Rush, Thomas Paine, and Joseph Priestley. Everything in this volume shows great care and erudition, and it deserves a place in almost every library. Nonetheless, readers might wish that more attention had been paid to the overall teachings of Jefferson's Bible and their influence on subsequent generations upto today. Summing Up: Recommended. Lower-level undergraduates through researchers/faculty; general readers. --L. J. Greenspoon, Creighton University