A Revolution in Wood: The Bresler Collection (Hardcover) 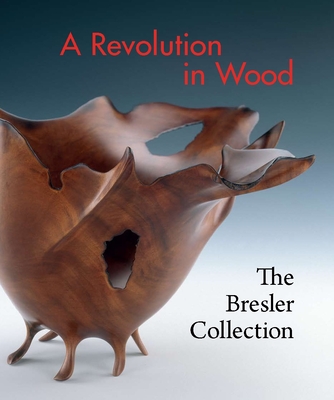 A Revolution in Wood: The Bresler Collection (Hardcover)

A Revolution in Wood celebrates the magnificent gift of sixty-six pieces of turned and carved wood to the Renwick Gallery of the Smithsonian American Art Museum by the distinguished collectors Fleur and Charles Bresler. Illustrated in lavish detail, works by this country's best-known wood artists highlight the growing sophistication of American craft's youngest medium and the expressive capacity of its most organic material.

Masterpieces by the field's pioneers, including David Ellsworth, William Hunter, Mark and Melvin Lindquist, Edward Moulthrop, and Rude Osolnik, demonstrate the extraordinary range of expression achievable on the lathe, the medium's foundational tool. Compelling recent works by Ron Fleming, Michelle Holzapfel, Hugh McKay, Norm Sartorius, Mark Sfirri, and many others reveal the advent of new techniques, including multi-axis turning, the incorporation of secondary materials, and a strong focus on carving.

A wide-ranging essay by Renwick Curator Nicholas R. Bell examines contemporary wood art's historical roots and its rapid growth since the 1970s. Particular attention is given to the medium's development outside the studio craft movement and how that dynamic has shaped the current field.

An interview with Fleur Bresler by former Renwick Curator-in-Charge Kenneth R. Trapp offers a window on the collector's passion and highlights her twenty-five-year dedication to wood and to the artists she considers family.

The final section, “Wood Art at the Renwick Gallery,” illustrates in color over two hundred works by more than one hundred artists, making this premier public collection available in print for the first time. From James Prestini's original gift of twenty pieces before the Renwick's opening to experimental works by current artists, this guide to the Smithsonian's collection will serve as a reference for years to come.

Nicholas R. Bell is curator of the Renwick Gallery of the Smithsonian American Art Museum in Washington, D.C. He is a former Lois F. McNeil Fellow at the Winterthur Museum and graduate of the Winterthur Program in American Material Culture at the University of Delaware.

Kenneth R. Trapp was curator-in-charge of the Renwick Gallery from 1995–2003. Before his tenure at the Smithsonian, Trapp was curator of decorative arts at the Oakland Museum of California.
From CHOICE
An insightful foreword by Elizabeth Broun, director of the Smithsonian American Art Museum, introduces this exquisite volume, which accompanied an exhibition of the same name featuring 66 functional and nonfunctional wood objects (dating to between 1986 and 1999) that were donated by Fleur and Charles Bresler. Bell (curator, Renwick Gallery) provides an informed historical look at the lathe, an overview of the Bresler collection, and a discussion of its place in the museum's permanent collection. In addition to large color photographs, eloquent commentary accompanies each piece and notes its contribution to the field. Former curator Kenneth Trapp reveals in a conversation with Fleur Bresler that her interest in wood was sparked by a 1986 Renwick exhibition of turned wood bowls. A Revolution in Wood is a very appropriate title--not only are most of the objects turned, but many of them revolutionized contemporary craft. The donation, which includes many early examples on the cutting edge, complements and expands the Renwick collection to more than 200, all of which are documented with color photos and descriptions. An extensive bibliography enhances this fabulous resource. Summing Up: Essential. Lower-level undergraduates and above; general readers. -- C. A. Ventura, Tennessee Technological University

From Library Journal
In this exhibition catalog, Smithsonian American Art Museum’s Renwick Gallery curator Bell highlights the recent gift of 66 dynamic and elegantly crafted turned- and carved-wood objects from noted collectors Fleur and Charles Bresler in honor of former Renwick curator-in-charge, Kenneth R. Trapp. The book includes Bell’s thoughtful essay on the “Roots” and “Revolution” of the wood-turning movement and a conversation with Fleur Bresler by Trapp. The main section features photographic highlights and details of the new collection, including physical descriptions of each object and brief synopses of the 38 artist’s backgrounds, from renowned artisans such as David Ellsworth, Ron Fleming, and Rude Osolnik to newer artists Michelle Holzapfel, Todd Hoyer, and Hugh McKay. This collection was donated to ensure that these magnificent treasures are preserved for future generations. The final section provides a photographic glimpse of the Renwick’s entire permanent wood art collection, excluding furniture. VERDICT Recommended for American craft and wood enthusiasts.—Stephen Allan Patrick, Jonesborough, TN