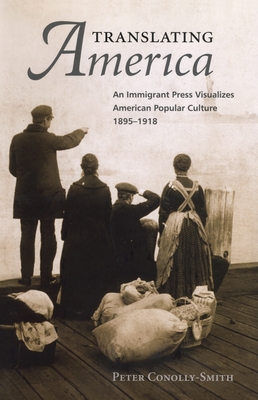 
Not On Our Shelves—Ships in 1-5 Days
At the turn of the century, New York City's Germans constituted a culturally and politically dynamic community, with a population 600,000 strong. Yet fifty years later, traces of its culture had all but disappeared. What happened? The conventional interpretation has been that, in the face of persecution and repression during World War I, German immigrants quickly gave up their own culture and assimilated into American mainstream life.

But in Translating America, Peter Conolly-Smith offers a radically different analysis. He argues that German immigrants became German-Americans not out of fear, but instead through their participation in the emerging forms of pop culture. Drawing from German and English newspapers, editorials, comic strips, silent movies, and popular plays, he reveals that German culture did not disappear overnight, but instead merged with new forms of American popular culture before the outbreak of the war. Vaudeville theaters, D.W. Griffith movies, John Philip Sousa tunes, and even baseball games all contributed to German immigrants' willing transformation into Americans.

Translating America tackles one of the thorniest questions in American history: How do immigrants assimilate into, and transform, American culture?
Peter Conolly-Smith holds a Ph.D. in American studies from Yale University. He is an assistant professor of history at Union County College in New Jersey and lives in New York City.
“Peter Conolly-Smith offers a rare and fascinating look at the rise and fall of an urban ethnic culture in early twentieth-century New York. Translating America returns us to a moment on the eve of the First World War, when the press, the politicians, and the impresarios vied fiercely for the cultural loyalties of German-Americans. The story he tells revisits and revises the surprising consequences of that struggle.”—Jean-Christophe Agnew, Yale University

“Translating America is cultural history at its best. What results from painstaking research and most impressive detective work is a complete reconstruction of the cultural moment of World War I in New York. This is an important contribution to American studies in a comparative perspective. Although the word is never mentioned, Translating America does what ‘multiculturalism’ should have been doing all along.”—Werner Sollors, Harvard University