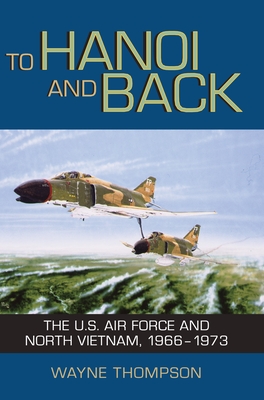 
Not On Our Shelves—Ships in 1-5 Days
After nearly eighteen months of the largely unsuccessful bombing campaign called Operation Rolling Thunder, the US Air Force began to look for ways to overcome technological, geographical, and political challenges in North Vietnam and use limited air power more effectively. In 1972 the two Linebacker campaigns joined with other air operations to make a dramatic, although temporary, difference. While they unleashed powerful B-52 area bombers, the campaigns also demonstrated the efficacy of newly developed laser-guided precision bombs.

Drawing upon twenty years of research in classified records, Wayne Thompson integrates operational, political, and personal detail to present a full history of the Air Force role in the war against North Vietnam. He provides an unprecedented view of the motivations and actions of the people involved—from aircrews to generals to politicians—in every phase of the air campaigns. He outlines, for instance, the political reasons for President Johnson's reluctance to use B-52 bombers against major North Vietnamese targets. He also examines how the media influenced US policy and how US prisoners became the war's most celebrated heroes.

The war in Southeast Asia ultimately pushed the Air Force toward adopting more flexible tactics and incorporating increasingly sophisticated weapons that would shape later conflicts.
Wayne Thompson is chief of analysis at the Air Force History Support Office. He contributed to three of the six volumes of the Air Force's Gulf War Air Power Survey (1993) and has served since 1995 as the Air Force's lead historian on air power's role in recent Balkan conflicts.