At the Edge of Space: The X-15 Flight Program (Paperback) 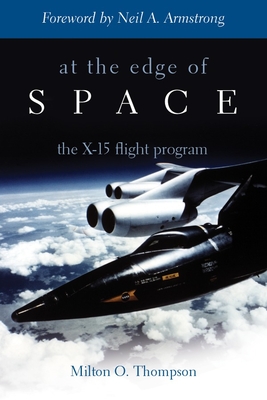 At the Edge of Space: The X-15 Flight Program (Paperback)

By Milton O. Thompson, Neil A. Armstrong (Foreword by)


Not On Our Shelves—Ships in 1-5 Days
(This book cannot be returned.)
In At the Edge of Space, Milton O. Thompson tells the dramatic story of one of the most successful research aircraft ever flown. The first full-length account of the X-15 program, the book profiles the twelve test pilots (Neil Armstrong, Joe Engle, Scott Crossfield, and the author among them) chosen for the program. Thompson has translated a highly technical subject into readable accounts of each pilot's participation, including many heroic and humorous anecdotes and highlighting the pilots' careers after the program ended in 1968.
Milton O. Thompson (1926-1993) was chief engineer at the NASA Ames-Dryden Flight Research Facility in Edwards, California.
“Thompson brings the era to life, describing the triumph and tragedy of the pilots and technicians that worked on perhaps the country’s most ambitious Xplane testing program.”—Sky & Telescope

“Thompson is especially strong in describing the human dimension of the X-15 effort, enlivening the narrative with both heroic and humorous anecdotes.”—Air Power History

“Thompson’s well-written history of the program captures the technical challenges, the camaraderie and, most of all, the high adventure of X-15 flight. Highly recommended.”—Publishers Weekly