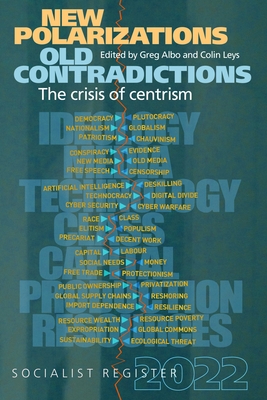 Takes the buzzword polarization as its point of departure to describe the vast, and ever-growing economic inequality worldwide

Polarization is a word commonly used by everyone from mainstream journalists to the person in the street, whatever their political stripe. But this widely recognized phenomenon deserves scrutiny. The 58th volume of the Socialist Register takes up the challenge, asking such questions as: Are the current tendencies towards polarization new, and if so, what is their significance? What underlying contradictions--between race, class, income, gender, and geopolitics--do the latest polarization trends expose? And to what extent can centrist politics continue to hold and contain these internal contradictions? This volume's original essays examine the escalating polarization of national, racial, generational, and other identities, all in the context of growing economic inequality, new forms of regional and urban antagonism, vaccine nationalism, and the shifting parameters of rivalry between the Great Powers.
Greg Albo (Editor) Greg Albo is a Professor in the Department of Political Science at York University, Toronto. Colin Leys (Editor) Colin Leys is Emeritus Professor of Political Studies at Queen's University in Kingston, Ontario.