A History of World Agriculture: From the Neolithic Age to the Current Crisis (Hardcover) 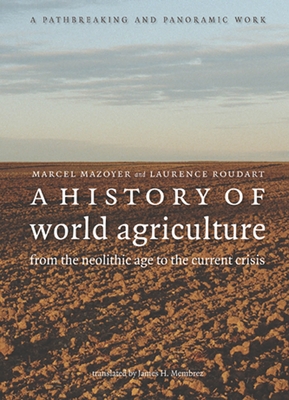 A History of World Agriculture: From the Neolithic Age to the Current Crisis (Hardcover)

Only once we understand the long history of human efforts to draw sustenance from the land can we grasp the nature of the crisis that faces humankind today, as hundreds of millions of people are faced with famine or flight from the land. From Neolithic times through the earliest civilizations of the ancient Near East, in savannahs, river valleys and the terraces created by the Incas in the Andean mountains, an increasing range of agricultural techniques have developed in response to very different conditions. These developments are recounted in this book, with detailed attention to the ways in which plants, animals, soil, climate, and society have interacted.

Mazoyer and Roudart's A History of World Agriculture is a path-breaking and panoramic work, beginning with the emergence of agriculture after thousands of years in which human societies had depended on hunting and gathering, showing how agricultural techniques developed in the different regions of the world, and how this extraordinary wealth of knowledge, tradition and natural variety is endangered today by global capitialism, as it forces the unequal agrarian heritages of the world to conform to the norms of profit.

During the twentieth century, mechanization, motorization and specialization have brought to a halt the pattern of cultural and environmental responses that characterized the global history of agriculture until then. Today a small number of corporations have the capacity to impose the farming methods on the planet that they find most profitable. Mazoyer and Roudart propose an alternative global strategy that can safegaurd the economies of the poor countries, reinvigorate the global economy, and create a livable future for mankind.