And Their Children After Them: The Legacy of Let Us Now Praise Famous Men: James Agee, Walker Evans, and the Rise and Fall of Cotton in the South (Paperback) 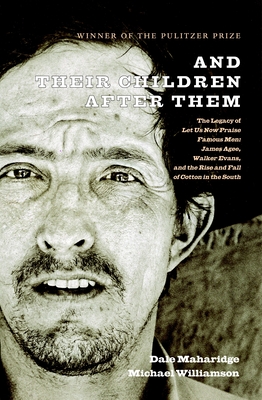 And Their Children After Them: The Legacy of Let Us Now Praise Famous Men: James Agee, Walker Evans, and the Rise and Fall of Cotton in the South (Paperback)

In And Their Children After Them, the writer/photographer team Dale Maharidge and Michael Williamson return to the land and families captured in James Agee and Walker Evans’s inimitable Let Us Now Praise Famous Men, extending the project of conscience and chronicling the traumatic decline of King Cotton. With this continuation of Agee and Evans’s project, Maharidge and Williamson not only uncover some surprising historical secrets relating to the families and to Agee himself, but also effectively lay to rest Agee’s fear that his work, from lack of reverence or resilience, would be but another offense to the humanity of its subjects. Williamson’s ninety-part photo essay includes updates alongside Evans’s classic originals. Maharidge and Williamson’s work in And Their Children After Them was honored with the Pulitzer Prize for nonfiction when it was first published in 1990.
When he isn’t crossing the country talking to the people who live here, former newspaper reporter DALE MAHARIDGE has been a visiting professor of journalism at Columbia University and Stanford. He was a Nieman Fellow at Harvard University in 1987–88. He lives in Northern California. MICHAEL WILLIAMSON is a photographer for the Washington Post who, in addition to the Pulitzer Prize he shares with Maharidge, won a second Pulitzer Prize for his coverage of the war in Kosovo. His other honors include the World Press Photo and Nikon World Understanding Through Photography awards.
“Mr. Williamson's photos are spellbinding and should become instant classics. Mr. Maharidge is a crusading journalist with the heart of a young man who can still look at and write about the bittersweet in life. Good for him, and good for us that he has done it.” —John Elvin, The Washington Times

“A book that reaches into this country's heart of darkness … A tragically human story more telling than a thousand polls. The photographs by Mr. Williamson are eloquent.” —Herbert Mitgang, The New York Times

“The collaborative effort of photographer Walker Evans and writer James Agee, Let Us Now Praise Famous Men, portrayed the lives of three sharecropper families in the South during the Depression, giving witness to the tyranny of the tenant farming system that enslaved some nine million tenants in 1936. Their book was at once poetic, scathing, compelling, and tragic. Fifty years later, Maharidge and Williamson have revisited, photographed, and interviewed the surviving members and descendants of the Gudger, Ricketts, and Woods families shown in that book … A fascinating work.” —Library Journal

“A stunning sequel to the James Agee/Walker Evans classic, Let Us Now Praise Famous Men. It is at times astonishing, at all times deeply moving.” —Studs Terkel