How Dalia Put a Big Yellow Comforter Inside a Tiny Blue Box: And Other Wonders of Tzedakah (Hardcover) 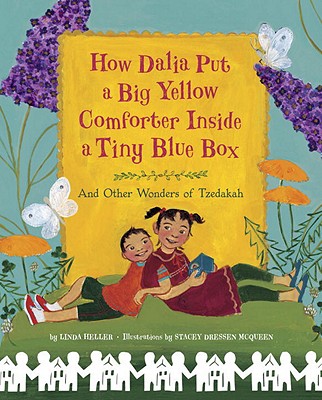 How Dalia Put a Big Yellow Comforter Inside a Tiny Blue Box: And Other Wonders of Tzedakah (Hardcover)


Special Order—Subject to Availability
Is Dalia’s little blue box magic—or is the real magic the generosity that helps her fill it?

When Dalia learns about tzedakah, the Jewish tradition of charity and caring, she creates a tzedakah box where she can keep the money she’s saved to help those in need.  Her little brother Yossi is curious about the Hebrew letters painted on the box. "Are those letters magic?" he asks. They must be because Dalia tells him she's putting a big yellow comforter, a butterfly bush, and a banana cream pie inside of it! How ever will she do it?


Though there may be joy in receiving, Dalia’s story serves as a powerful reminder that the greatest joy of all comes from giving generously to others.
LINDA HELLER has written and/or illustrated nearly a dozen children’s books. These have received, among other honors, the Parents Choice Award and the Sydney Taylor Book Award, Linda wrote Dalia’s story in honor of her grandmother, Sarah Witkin, a Russian immigrant who embodied the practice of tzedakah through her generosity toward others. Linda is thrilled to be able to introduce the practice of giving tzedakah to a new generation. She teaches writing and art workshops for children in her hometown of New York City.


Publishers Weekly named STACEY DRESSEN MCQUEEN's first picture book, Boxes for Katje by Candace Fleming, a Best Children’s Book of 2003 and praised it as “an outstanding debut.” Booklist said of Stacey’s artwork in a starred review of The Biggest Soap by Candace Fleming, “[T]he pencil, oil pastel, and acrylic artwork, alive with the sun-drenched colors and patterns of the South Pacific, bubble[s] with happiness.” Stacey has drawn inspiration for her work from a wide range of sources, from Mexican folk-art to Gauguin’s paintings, to Oceanic tribal art. For Dalia’s story, Stacey was inspired by the ancient tradition of Jewish papercuts. Stacey lives with her family in Portland, Oregon.
Review, The Horn Book, September/October 2011:
"McQueen’s rich-hued acrylic and oil pastel illustrations radiate warmth; the pictures of Dalia and her rosy-cheeked chums pitching in are cheerfully cluttered, while other images capture smaller, more intimate moments between the siblings. In Judaism tzedakah is considered a moral obligation, and the story shows how even young children can readily fulfill the tenet."

Starred Review, Kirkus Reviews, June 1, 2011:
"Dressen-McQueen’s fully developed summer scenes in acrylic and oil pastel provide a vivid complement to the often–page-filling text, their naive, folk quality bringing great quantities of love and warmth to the tale.  As vivid a demonstration of community as readers are likely to find."