The Philosopher Fish: Sturgeon, Caviar, and the Geography of Desire (Paperback) 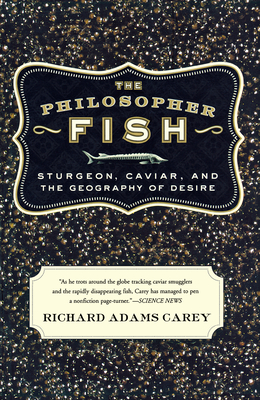 The Philosopher Fish: Sturgeon, Caviar, and the Geography of Desire (Paperback)


Special Order—Subject to Availability
A captivating chronicle of a fast-disappearing fish--and of the people whose lives and livelihoods depend on it.

Since the days of the Persian Empire, caviar has meant status, wealth, prestige, and sex appeal. Today it sells for up to $100 an ounce, and aficionados will go to extraordinary lengths to get their fill of it. That's just the problem.

Here, Carey immerses himself in the world of sturgeon, the fish that lays these golden eggs. Ancient, shrouded in mystery, inexplicable in several of its behaviors, the sturgeon has a fascinating biologic past--and a very uncertain future. Sturgeon populations worldwide have declined 70% in the last 20 years, most drastically in the Caspian Sea, and the beluga sturgeon, producer of the most coveted caviar, is an endangered species.
Richard Adams Carey is the author of Against the Tide: The Fate of the New England Fisherman, a nonfiction chronicle of the 1995-96 fishing season in the lives of four Cape Cod commercial fishermen, among other works.