Hummelo: A Journey Through a Plantsman's Life (Paperback) 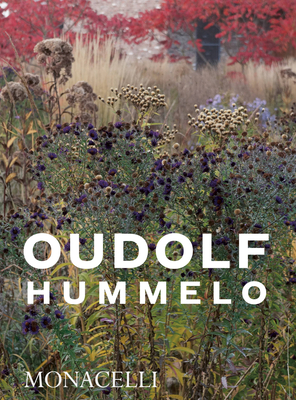 Hummelo: A Journey Through a Plantsman's Life (Paperback)


Not On Our Shelves—Ships in 1-5 Days
An intimate look at the personal garden of the Dutch landscape designer renowned for his plantings at the High Line in New York City, and Lurie Garden at Chicago’s Millennium Park.

Hummelo—near the village of the same name in Gelderland in the eastern Netherlands—is visited by thousands of gardeners seeking inspiration each year. It is Piet Oudolf’s home, his personal garden laboratory, a former nursery run by his wife Anja, and the place where he first tested new designs and created the new varieties of perennials that are now widely available.

A follow-up to Oudolf’s successful Landscapes in Landscapes—Hummelo tells the story of how the garden has evolved over the past three decades since Oudolf, Anja, and their two young sons moved onto the property, with its loamy sand and derelict, wood stove-heated farmhouse, in 1982. Text by noted garden author and longtime personal friend Noel Kingsbury places Hummelo in context within gardening history, from The Netherlands’ counterculture and nascent green movement of the 1960s, to prairie restoration in the American Midwest, and shows how its development has mirrored that of Oudolf’s own outstanding career and unique naturalistic aesthetic.

Oudolf has long been at the forefront of the Dutch Wave and New Perennial Style movements in garden design, which have ecological considerations at their base. His work stresses a deep knowledge of plants, eschewing short-lived annuals in favor of perennials that can be appreciated for both structure and blooms in every season. He is credited for leading the way to today’s focus on sustainability in garden design.

The book will appeal to readers who favor beautiful, biodiverse, and ever-changing plantings: seed heads, grasses, sedges, and winter silhouettes. They will be drawn into its pages by lush photography, often demonstrating how Oudolf views his own work, and providing rare glimpses into his daily life. Short essays highlight important techniques, including scatter plants and matrix planting, and introduce other famed landscape designers—Karl Foerster, Henk Gerritsen, Rob Leopold, Ernst Pagels, and Mien Ruys—to create a full panorama of the movement Oudolf now leads.
Piet Oudolf is an influential Dutch garden and landscape designer at the forefront of the New Perennial movement and the author of numerous books on gardening and landscape design. He has constructed dozens of residential, commercial and institutional gardens and his projects can be found throughout The Netherlands, England, Ireland, Germany, Sweden and the U.S.—including the celebrated High Line and Battery Park in New York City, Lurie Garden at Millennium Park in Chicago, and temporary installations for the Venice Biennale and the Serpentine Gallery pavilion. He is the recipient of the Gold Medal and title of Best in Show at the Chelsea Flower Show (2000), the Gold Veitch Memorial Medal from the Royal Horticultural Society (2002) and the Award of Distinction from the Association of Professional Landscape Designers in 2010. He was awarded the highest cultural honor in The Netherlands, the Prince Bernhard Culture prize, in 2013.

Noel Kingsbury is an internationally acclaimed garden writer and the author of more than 20 books (including several with Oudolf), as well as a teacher, lecturer, and garden designer. He is a regular contributor to The Daily Telegraph, The Guardian, The Garden, and Hortus, among other publications.
A Publishers Weekly Best Book of the Year

“An updated version of the original . . . reflects important new commissions and directions for Oudolf.”
—The Washington Post

“Even if you already have the original of this book, you'll want to consider this new, expanded paperback version that includes 13 recent projects shown here for the first time, along with Piet Oudolf's new strategies for design and plant selection. . . . With 350 photographs, the book is an encyclopedia of Oudolf's planting style and his philosophy of looking to the natural world for inspiration.”
—Garden Design Online

“To mark his 70th birthday, Piet Oudolf, the Dutch prince of a new, highly artistic style of planting, produced a handsome, lavishly photographed book, Hummelo: A Journey Through a Plantsman’s Life, a gift to all serious lovers of garden design. His farmhouse in Hummelo, a village in the eastern Netherlands, was the modest beginning of a nursery that eventually drew customers from around the world. Written by his frequent collaborator, Noel Kingsbury—they also worked together on the indispensable Planting: A New Perspective—Hummelo isn’t a biography, but it does explain how the man who devised New York City’s Battery and High Line gardens and Chicago’s Lurie Garden did 'so much to raise the profile of landscape designers as a group.' It also sketches a fascinating history of modern Dutch gardening, largely unknown in the United States. If we truly want to heal the land, this important work is a model. And, in their adventurous, arresting, multilayered density, Oudolf’s compositions are stunningly beautiful.”
—The New York Times Book Review

“Written to commemorate Piet Oudolf’s 70th birthday, Hummelo: A Journey Through a Plantsman’s Life recounts his path from a small-garden designer in the Netherlands to a world-renowned plantsman, best known for his breathtaking perennial landscapes. But it is not a biography, stresses the author, Noel Kingsbury. It is a story of the evolution of Oudolf’s work, beginning with his garden near the village of Hummelo, and tracing the fluctuating design processes that Oudolf himself believes should be dismantled once learned. The book is organized chronologically, opening with Oudolf’s move from Haarlem, near Amsterdam, to a plot just outside Hummelo, where Oudolf settled with his family for “growing space” and eventually a nursery for the perennial material that wasn’t readily available in the area. It then follows his growing success in Europe before his break in the United States with Chicago’s Lurie Garden and eventually the High Line in New York City. Accompanying Kingsbury’s text are many photographs taken at differing scales, seasons, and stages of completion, highlighting the level of detail Oudolf invests in his landscapes. In addition to photographs, the book features noteworthy practices of Oudolf’s, including planting arrangements and techniques, which are broken down into clear explanations of their historical context and development. While his planting designs have evolved over the 30-some years covered in Hummelo, a glance at any page reveals the beauty and composition that are recognizably Oudolf’s.”
—Landscape Architecture

“To celebrate the 70th birthday of Dutch plantsman Piet Oudolf—whose romantic drifts of painterly grasses and perennials have made him the most copied landscape designer alive—The Monacelli Press is publishing a new book about his private garden. When garden designer Oudolf and his wife Anja moved with their two young sons to an eastern Netherlands farmhouse on a one-acre plot in 1982, there was no garden and no nursery where he could grow plants for his business. 'We had money to survive one year,' remembers Oudolf. 'And at first we had no clients.' And no heat in the house except a wood stove. In Hummelo, British garden writer Noel Kingsbury tells the story of how Oudolf and his wife managed, with hard work and her cut-flower business, to gradually create a garden that embodied the ideas of today's New Perennials movement. Along the way, Hummelo became so famous in its own right that the Oudolfs might wake up on any given day to find strangers tromping about (after the garden's much-photographed yew hedges died in 2010, some tourists from Brussels were so shocked and disappointed that without another word 'they got in their car and drove away,' Oudolf says).”
—Gardenista

“Illuminates the garden philosophy which led to the seemingly wild, native-plants-style creation of meadows and flowering plants which have riveted us all. The pictures, most of them by Oudolf, are evocative.”
—Women's Wear Daily

“Hummelo, is something of a biography, or as close to one as Oudolf would allow. Despite being such a well-known figure in the garden world, he is a self-contained fellow. Bringing the story back to this plot of land, reflecting the evolution and changes in both Oudolf’s life and career, reinforces just how much he is a true plantsman, someone who delights in the variations and possibilities of propagating and growing.”
—Kaufmann Mercantile's “Field Notes”

“This wonderful book . . .  is a treasure.”
—Brattleboro Reformer