The Language of Angels: A Story About the Reinvention of Hebrew (Hardcover) 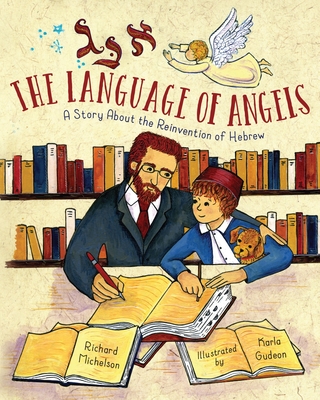 The Language of Angels: A Story About the Reinvention of Hebrew (Hardcover)


In 1885, few Jews in Israel used the holy language of their ancestors, and Hebrew was in danger of being lost—until Ben Zion and his father got involved. Through the help of his father and a community of children, Ben modernized the ancient language, creating a lexicon of new, modern words to bring Hebrew back into common usage. Historically influenced dialogue, engaging characters, and colorful art offer a linguistic journey about how language develops and how one person's perseverance can make a real difference.

Hebrew teachers and students in Jewish schools will welcome this gorgeous new picture book about how the language developed and the impact of one person's perseverance on an entire people — School Library Journal
Richard Michelson's children's books have been listed among the 10 Best Books of the Year by The New York Times, Publishers Weekly, and the New Yorker. His many books include Too Young for Yiddish and Busing Brewster. He lives in Northampton, Massachusetts.

Karla Gudeon is a former teacher whose art is influenced by illuminated manuscripts and folk art. She is the illustrator of One Red Apple, Hanukkah Haiku, and Grandma's Wedding Album.
It isn't easy being the child of a visionary. Ben-Zion's father is Eliezer Ben-Yehuda, a man determined to revive Hebrew as a living, everyday language—even though most of his fellow Jews in 19th-century Jerusalem accuse him of sacrilege and are content speaking Yiddish or the languages of their native lands. Eliezer insists on raising Ben-Zion as the first native speaker of modern Hebrew, which makes for tense family moments and a lonely childhood. But gradually, father and son persuade other children that speaking Hebrew might not be such a bad idea, and that they can have a hand in building the language "word by word." Gudeon (Grandma's Wedding Album) turns Hebrew letters and words into graphic elements that dance across the pages and frame the text, although it's not enough to counter the wooden feel of her vignettes. But Michelson (Fascinating: The Life of Leonard Nimoy) knows how to turn a complex story into both a brain tickler (how do you invent a word for "ice cream" or "bicycle"?) and a compelling emotional journey. Endnotes provide additional context, including where Michelson's story diverges from the historical record.
—Publishers Weekly


The ancient Hebrew language enters the modern world. In 1885 Jerusalem, a young boy named Ben-Zion cannot converse with the polyglot children of his age because his father has decreed that he speak only Hebrew, "the first child in more than two thousand years" to do so. The father, Eliezer Ben-Yehuda, is a Zionist immigrant to Palestine and fervently believes that Jews from every country, speaking so many different languages, should return to the language of their ancestors and of Jewish Scripture. Ben-Zion is not popular in the neighborhood; some consider Hebrew a holy tongue to be used only in prayer. The father persists and finds that he needs to invent words to modernize the ancient language. Thus, by combining the Hebrew words for "wheel" and for "a pair of" he creates a word for bicycle. Ben-Yehuda's work leads to a network of schools, a dictionary, and the eventual designation of Hebrew in 1948 as the national language of Israel. Michelson's account, based on history, is presented as a story with invented dialogue, which he addresses in his author's note. Gudeon's digitized watercolor illustrations, full of children, are lively and feature Hebrew words and letters as part of the page design. A lively introduction to the work of a Hebrew language scholar and lover—and his family.
- Kirkus Reviews

Hebrew as a colloquial language died out around 200 BCE, when Jews were driven out of Jerusalem and settled in various places around the world. They learned the languages of their adopted countries and used Hebrew only for prayer. Eliezer Ben-Yehuda is credited with reinventing Hebrew as the unifying language of the Jewish people, and he dedicated his entire life to creating a modern Hebrew dictionary. Michelson tells his story through the eyes of Ben-Yuhuda's young son, Ben-Zion, who grew up in Jerusalem in the 1880s. While the other children in his neighborhood spoke Yiddish, Arabic, Spanish, or Ladino, Ben-Zion's father insisted that he speak only Hebrew. He wanted Ben-Zion to be "the first child in more than two thousand years who [would] grow up speaking only the beauty of our ancient tongue." Ben-Zion helped his father create new Hebrew words for "ice cream," "bicycle," and "school"—and within one generation, modern Hebrew was born. Inspired by illuminated manuscripts, the bright, decorative watercolor illustrations in oranges and reds beautifully complement the text and intergrate Hebrew letters and words throughout. A comprehensive three-page afterword provides additional information about Ben-Zion and his parents, as well as the history of Hebrew, Jerusalem, and the modern state of Israel.
Hebrew teachers and students in Jewish schools will welcome this gorgeous new picture book about how the language developed and the impact of one person's perseverance on an entire people.
—School Library Journal

Eliezer Ben-Yuhuda, a Jewish resident of Jerusalem in the 1880s, devoted his life to promoting the modern use of Hebrew. Although always used for religious prayers and rites, Hebrew had died out as a spoken language more than 2,000 years before and lacked terms for modern ideas and objects. Ben-Yehuda created new words, often borrowing from related languages, and published a modern Hebrew dictionary, his milon. Through his efforts, Hebrew became Israel's official language in 1948. Michelson's text draws on Ben-Yehuda's memoirs, although he tells this story from the perspective of Ben-Yehuda's young son, Ben-Zion. Gudeon's mixed-media illustrations depict period clothing and architecture, and she effectively incorporates Hebrew letters and words into the art. Appended with a generous afterword explaining the changes Michelson made to this story, this title also offers information about important individuals, the Hebrew language, and Palestine. With a smoothly written text and an appealing child focus, this makes a perfect resource for religious school collections and public library language shelves.
—Booklist