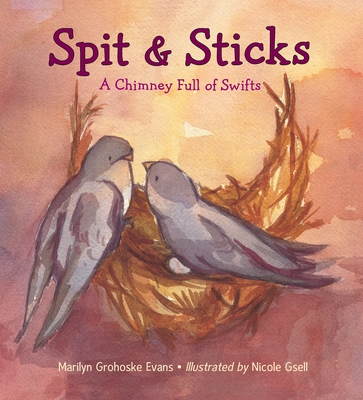 
Special Order—Subject to Availability
Succinct and factual text follows chimney swifts as they arrive on a Texas farm, build their nest, lay eggs, ready for fledglings to take flight, and eventually prepare to migrate back to South America. In a parallel, wordless story, a mom, dad, and young girl on the farm watch the chimney swifts throughout the summer and fall, even as they build a new crib and ready for the new baby they're expecting. As they enjoy their baby's first months, they also celebrate the fledglings' first flight and bid the birds good-bye until next year.

Nicole Gsell's soft illustrations follow the tales of both families—bird and human—from each unique perspective.

A beautiful addition to bird lovers' collections, as well as classrooms and libraries.
Marilyn Grohoske Evans first saw chimney swifts chitter and zip in and out of grain elevators in Texas. She was fascinated, and Spit & Sticks was born. Marilyn has a journalism and public relations background, and she has published educational books for children and for school literacy programs. She is active in the Society of Children's Book Writers and Illustrators and spends time in her garden with the butterflies and flowers she loves. This is her first picture book.

Nicole Gsell graduated from Rhode Island School of Design and is working on a master's in art education at the Massachusetts College of Art and Design. Originally from Long Island, New York, Nicole moved to Boston to pursue a career in publishing. She also illustrated two independently published books, We are Twins! The Story of Sam and Ben and The Tremendous Pagoda Tree.
While a pair of swifts raises a family in their chimney, a Texas family grows as well.
The straightforward text in Evans' first picture book follows a family of swifts from the pair's return to the chimney of the farmhouse where they were born through nest-building, egg-laying and hatching, and feeding their chicks, who eventually fledge, fly, and feed themselves. In fall, the birds take off, joining a swarm of swifts heading for their winter home in the Southern Hemisphere. This simple narrative focuses exclusively on the birds, but it is mirrored by the activities of the mixed-race farming family shown in artfully primitive watercolor illustrations (with collage elements). One page shows the birds building their nest inside the chimney; opposite, the human father and daughter construct a crib while the visibly pregnant mother knits. While the birds "snuggle close" on the eggs, the human father reads to his daughter on his lap. A striking double-page spread shows the chicks emerging from their eggs. On the next pages, "It's a Boy" balloons fly from the farmhouse mailbox. Throughout the summer the baby grows ever more capable, just as the chicks do. An endnote includes further information about swifts and suggestions for readers to learn more and help preserve these interesting birds.
A clever connection to the natural world for young readers and listeners.
-Kirkus Reviews


A biracial family of three prepares to welcome a new baby boy while swifts nesting in the chimney of their quaint Texas country home raise their own fledglings. In calming prose, debut author Evans keeps the narrative focus on the birds ("Chittering, the fledglings jubilantly feast and frolic, consuming tons of insects"), letting the human family's story play out silently in Gsell's soft, loose watercolors, which include digitally collaged elements. Together, Evans and Gsell convey the quiet intersection of human an animal life, while an endnote offers more detailed information about the migration of chimney swifts.
-Publishers Weekly


One spring in Texas, a chimney swift flies back from South America to the farmhouse where it was born. In the chimney, the swift and its mate build a nest, and the female lays three white eggs. Three weeks later, they hatch. Eating all the insects their parents can bring them, the young birds grow up quickly, and soon they are trying their wings and flying about the farm with their family. In early winter, the swifts join a flock flying southward. The text is simple and informative, but it tells only part of the story in this appealing offering. Created with broad brushstrokes of watercolor and including digital elements, the vivid illustrations also show people on the farm: a father, mother, little girl, and (around the time the swifts’ eggs hatch) new baby brother. There’s little direct interplay between the human and avian families, which is realistic. But those scenes, such as the father and daughter waving at the fledgling birds, become a rewarding part of the visual narrative. An engaging, informational picture book.
-Booklist