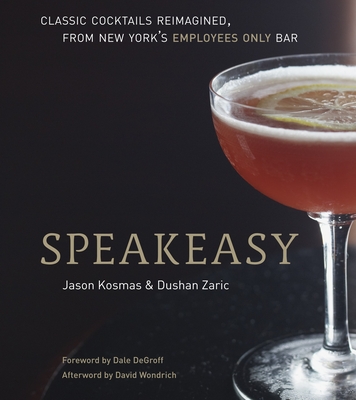 
Special Order—Subject to Availability
Time-honored cocktails like the New York Sour and the Sidecar were born during the era of Prohibition, the blessedly bygone social experiment that turned drinking into an underground adventure. In those days, hard beverage options were usually made with homemade hooch and flavorings of dubious origin and quality.

Thankfully, a cocktail renaissance has emerged in many of today’s bars, where inventive drinks showcase both the artistry and craft of bartending. At their moody and atmospheric West Village bar-restaurant Employees Only, master mixologists Jason Kosmas and Dushan Zaric can regale you with colorful tales of cocktail origins—or just pour you a mean drink. In Speakeasy, Kosmas and Zaric take their inspiration from traditional favorites, then use the finest spirits, the freshest ingredients, and a good measure of reverence for their craft to elevate the mixed drink to artisanal status.

More than 80 imaginative libations that riff on the classics are showcased in this one-of-a-kind collection. Recipes emphasize fresh fruits and herbs, homemade syrups and infusions, and a careful balancing of flavors, with a mind toward seasonality. A Ginger Smash is offered in four different versions: kumquat, pineapple, pear, or cranberry, depending on the time of year. The Millionaire becomes the Billionaire with the addition of homemade grenadine and 107-proof bourbon. And the South Side becomes the West Side by replacing the gin with sun-kissed Meyer lemon–infused vodka. With the specter of Prohibition firmly in the past, Speakeasy shares recipes for the choicest potent potables, reimagining the finest drinks of yesterday for today’s thirsty imbibers.
JASON KOSMAS and DUSHAN ZARIC first became a team at Soho’s Pravda, where they were at the forefront of the Martini craze that swept the late 1990s. They opened Employees Only along with three other owners in 2004. Together the two have also formed Cocktail Conceptions, a beverage consulting company, and have created brand launches and marketing strategies for major labels such as Absolut, Pernod Ricard, and Perrier-Jouët Champagne. Their latest bar-restaurant venture is Macao Trading Co. in Tribeca.
“One of New York’s most serious cocktail bars shares its recipes, both classic and creative. Mustaches not included.”
—The New York Times Book Review, Web Extra: 25 More Cookbooks, 12/3/10

“An elegant book from bartenders behind Employees Only. . . . We have seen compendiums of classic recipes before, but this one ups the game with thoughtful directions and NY flair.”
—San Francisco Bay Guardian, Appetite: Delicious giving, 12/3/10

“A survey of the city’s 2010 culinary scene wouldn’t be complete without cocktails; luckily, Jason Kosmas and Dushan Zaric have published this book of quaffs served in their popular West Village boîte, Employees Only.”
—New York magazine, Best NYC Cookbooks of 2010, 11/24/10

“The swells behind Employees Only penned this cocktail compendium, which breaks down classic and newfangled mixed drinks, alongside tips on properly stirring, muddling and more.”
—Time Out New York, The Season’s Best Cookbooks, 11/12/10

"Dushan Zaric and Jason Kosmas, the handsome mixologists behind NYC’s famed Employees Only bar/resto, keep it classy in their new book of cocktails, Speakeasy. Their recipes for a perfect dry martini, mai tai, and/or Pimm’s Cup make it a party must-have."
—DailyCandy, The Best New Fall Cookbooks, 11/12/10

“Kosmas and Zaric (You Didn't Hear It from Us), owners of Employees Only, a not-so-hidden take on a Manhattan speakeasy, offer instruction on recreating classic drinks and stirring up some modern variations. Fresh ingredients are their mainstay, but since the focus is on old-school cocktails, fewer intense flavor combinations arise than what might be found in a more contemporary collection of artisanal concoctions. Not that there's anything wrong with that. It's curious, for instance, to learn that the Manhattan, circa 1882, contained more vermouth than it did rye, while its modern version calls for a bourbon to vermouth ratio of 2 to 1. Among the 90 offerings, there are some that one would proudly order across a crowded bar, such as the New York Sour with its shakeup of 101-proof rye, lemon juice, and dry red wine. Others would best be acquired on the down low, like the Monkey Gland, a cocktail of absinthe, gin, orange juice, and Grenadine. There is also the Amelia, a sequel to the Cosmopolitan, starring blackberry puree and elderflower liqueur. For the more literary minded, there is the Hemingway daiquiri, a supposed favorite of Papa's, wherein grapefruit juice finds harmony with rum and maraschino liqueur.” (Oct.)
—Publishers Weekly, 9/20/10

“Just after the new millennium, Jason and Dushan decided that the time was right for a different sort of speakeasy, and so they opened Employees Only. This speakeasy, unlike the ones run by gangsters where a good drink was rare and bad ones cost a fortune, celebrated premium products and classic bar service and you could walk right into the joint . . . no password necessary. Employees Only captured the hearts of New Yorkers and the joint has been full since the doors opened. The timing was impeccable—New York was ready for a late night place with solid food and great drinks. Ten years later and again the timing is impeccable; the book Speakeasy will hit the shelves at the most exciting time in the history of the American cocktail. Speakeasy gives the reader an inside look at the creative process brought to bear in crafting the retooled classic cocktails. The reader can share in the creative process more fully by producing their own homemade syrups, cordials, and infusions.”
—Dale DeGroff, from the foreword

“In the wee hours of December 27, 1930, five men sauntered into the West 45th Street speakeasy run by one Thomas Wassel and engaged him in earnest conversation, punctuating their speech with eight shots from the pistols they had hidden under their coats. He did not survive the conversation. Fortunately, I’ve never seen anything like that happen at Employees Only. Indeed, it would have made me very sad if I had, as Jason and Dushan, its proprietors and the authors of the very fine book you’re holding, are not only good friends of mine but also figures of no small importance in the modern Cocktail revolution. Employees Only was one of the very first bars dedicated to reviving the classic American art of the bar, and it remains one of the most successful. More than that, though, Dushan and Jason are bartenders to the last stir, and the world doesn’t have nearly enough of those. When I was first starting to loiter in groggeries, I did most of my drinking in old man’s bars. They were cheap, and I was poor. But there was also something about the dignity of the gents behind the bar that made their joints far more congenial to me than the usual college bars, with their smutty drinks and bartenders who didn’t know any more about life than I did. The old guys knew how to talk to every customer, and knew what to do in every odd situation that might arise. Those are lessons that Jason and Dushan, working bartenders since before such creatures as “bar chefs,” “celebrity mixologists,” and “brand ambassadors” began to stalk the earth, managed to absorb. Even better, they’ve brought that old, bartenderly way to a new generation.”
—David Wondrich, from the afterword

“The bar has been raised—Jason Kosmas and Dushan Zaric have written a powerfully passionate book. Their methodology is spot-on, their philosophy is nurturing, and their recipes are innovative without possessing the slightest hint of pretension. You don’t need to be a bartender to love this book—you just need to want to know how to fix great drinks.”
—Gary Regan, ArdentSpirits.com

“In addition to authoring a world-class book filled with delicious drink recipes, Jason and Dushan have shared their unique perspective on the mixed drinks evolution from Martini to Cocktail at the beginning of the twenty-first century. Speakeasy is a must for culinary historians and cocktailians alike.”
—Jim Meehan, managing partner at PDT, New York

“With Speakeasy, Jason and Dushan have demystified the cocktail experience and brought it into your home. They celebrate not only the history and romance of tipples, along with the art of those who fashion them, but also the beauty of the joints that serve them. It is a great time in America on both sides of the bar!”
—Tony Abou-Ganim, author of The Modern Mixologist