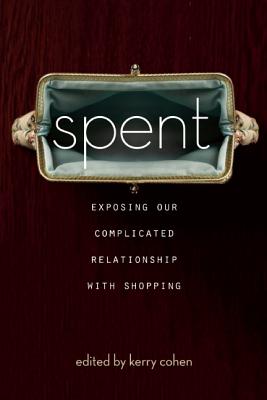 With a contributor list that includes notable female writers like Emily Chenoweth, Ophira Eisenberg, Allison Amend, and Aryn Kyle, the essays each shine light on the particular impact shopping has on all of us. Whether they’re cleaning out closets of loved ones, hiding a shoplifting habit, trying out extreme couponing, dividing up family possessions, or buying a brand-new car while in labor, the book’s contributors vacillate between convincing themselves to spend and struggling not to.

This illuminating anthology links the effects shopping has on our emotions-whether it fills us with guilt, happiness, resentment, or doubt-our self-worth, and our relationships with parents, grandparents, lovers, children, and friends.

Kerry Cohen is the author of eight books, including the memoirs Loose Girl: A Memoir of Promiscuity and Seeing Ezra: A Mother’s Story of Autism, Unconditional Love, and The Meaning of Normal; Dirty Little Secrets: Breaking the Silence on Teenage Girls and Promiscuity, a sociological examination of the "loose girl" issue; three young adult novels; and two forthcoming titles.

Cohen has appeared on Dr. Phil, Good Morning America, The Jeff Probst Show, the BBC, and a number of other television and radio shows. Her essays have appeared in the "Modern Love" column in The New York Times, The Washington Post, Portland Monthly, Brevity, and many other publications. She has been an Oregon Book Award finalist four times over. She blogs for Psychology Today and The Huffington Post, and also has her own blog, The Autistic Carpool, which charts the adventures of the carpool she drives to her son’s school. She teaches in the Red Earth Low-Residency MFA program and is also a counselor, currently working on her PsyD and specializing in sex and relationships.