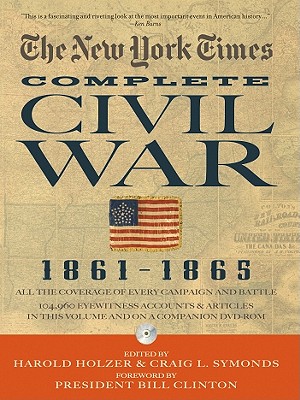 
Special Order—Subject to Availability
The Civil War as you've never experienced it before, through original, first-hand reportage of The New York Times, the country's newspaper of record.Â  Available for the first time in a unique book/DVD package

The New York Times, established in 1851, was one of the few newspapers with correspondents on the front lines throughout the Civil War. The Complete Civil War collects every article written about the war from 1861 to 1865, plus select pieces before and after the war and is filled with the action, politics, and personal stories of this monumental event. From the first shot fired at Fort Sumter to the surrender at Appomattox, and from the Battle of Antietam to the Battle of Atlanta, as well as articles on slavery, states rights, the role of women, and profiles of noted heroes such as Ulysses S. Grant and Robert E. Lee, the era comes alive through these daily first-hand accounts.

More than 600 of the most crucial and interesting articles in the book? Typeset and designed for easy reading
Commentary by Editors and Civil War scholars Harold Holzer and Craig Symonds
More than 104,000 additional articles on the DVD-ROM? every article the Times published during the war.
A detailed chronology highlights articles and events of interest that can be found on the disk.

Strikingly designed and illustrated with hundreds of maps, historical photographs, and engravings, this book is a treasure for Civil War and history buffs everywhere.

"Serious historians and casual readers alike will find this extraordinary collection of 600 articles and editorials about the Civil War published in The New York Times before and during the war of great value and interest . . . enough to keep the most assiduous student busy for the next four years of the war's sesquicentennial observations." --Â  James McPherson

"This fascinating work catapults readers back in time, allowing us to live through the Civil War as daily readers of The New York Times, worrying about the outcome of battles, wondering about our generals, debating what to do about slavery, hearing the words that Lincoln spoke, feeling passionate about our politics.Â  Symonds and Holzer have found an ingenious new way to experience the most dramatic event in our nation's history." -- Doris Kearns Goodwin

"Harold Holzer and Craig Symonds have included not only every pertinent article from the pages of The Times, but enhanced and illuminated them with editorial commentary that adds context and perspective, making the articles more informative and useful here than they were in the original issues.Â  Nowhere else can readers of today get such an understanding of how readers of 1861-1865 learned of and understood their war." -- William C Davis

The DVD runs on Windows 2000/XP or Mac OS X 10.3 or later.
Harold Holzer is one of the country's leading authorities on Abraham Lincoln and the political culture of the Civil War era. He has published over thirty books, including The New York Times Complete Civil War (Black Dog and Leventhal), and is the recipient of numerous awards, among them the Lincoln Prize and the National Humanities Medal. He lectures widely, appears on television frequently, and has written for the New York Times, American Heritage, and America's Civil War. Most recently he served as co-chair of the United States Abraham Lincoln Bicentennial Commission and is senior vice president for external affairs at the Metropolitan Museum of Art in New York. Find him online at www.haroldholzer.com.

Craig Symonds is a distinguished historian of the American Civil War and a retired professor and chairman of the history department at the United States Naval Academy. He is the author of eleven books including Decision at Sea: Five Naval Battlesthat Shaped American History, which won the Theodore and Franklin D. Roosevelt Prize in 2006, and Lincoln and His Admirals, which won the 2009 Lincoln Prize. He lives in Annapolis, Maryland.