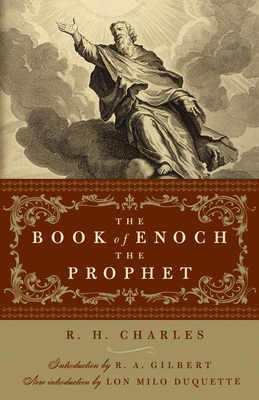 This superlative translation by noted scholar and theologian R. H. Charles is one of the best and most complete available.

Along with the renowned translation by R. H. Charles, this edition also included is an introduction by noted esoteric scholar and antiquarian bookseller R. A. Gilbert, He helps readers understand the historical context of The Book of Enoch and dispels many of the myths dubious interpretations previously attributed to it. In addition, this new edition of The Book of Enoch, features a new introduction by bestselling author and expert on mysticism and the occult spiritual literature, Lon Milo DuQuette.

The vision of the Apocalypse portrayed in The Book of Enoch takes a very different view than that of western Christians, although it is part of the biblical canon for Ethiopian and Eretrean Christians. According to Enoch, the wicked shall be cast out and the good will realize a literal heaven on Earth. The prophecies also contain the lost "Book of Noah," early references to a messiah as "Christ," and an accounting of the angels and subsequent creation of demons.

R.H. Charles was a noted theologian and scholar with many of his reference works remaining in print today and still of superlative scholarly value. His book, Apocrypha and Pseudepigrapha of the Old Testament in English remains a relevant work due mainly to his superior editorial skills. He died in 1931.

R.A. Gilbert is an esoteric scholar and antiquarian bookseller who lives in Bristol, England.
Lon Milo DuQuette has been involved with occult studies since the late 60s, and has become an acknowledged and widely recognized authority within the world of modern occultism. His previous publications include Magick of Thelema, The Tarot of Ceremonial Magick, Angels, Demons &amp; Gods of the New Millennium, and the humorous, biographical My Life with the Spirits.