The Ultimate Sherlock Holmes Puzzle Book: Solve Over 140 Puzzles from His Most Famous Cases (Puzzlecraft #11) (Paperback) 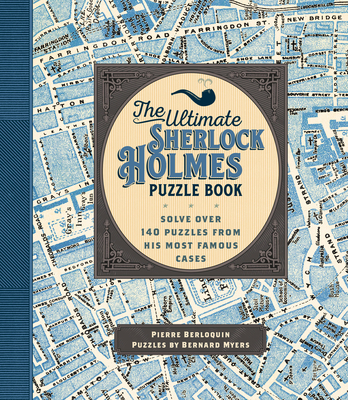 The Ultimate Sherlock Holmes Puzzle Book: Solve Over 140 Puzzles from His Most Famous Cases (Puzzlecraft #11) (Paperback)

This is book number 11 in the Puzzlecraft series.

​Solve over 144 puzzles, navigate around maps of London and the English countryside, search for hidden clues, and—most importantly—exercise your sharp intellect and keen perception skills, just as Sherlock Holmes would.

First appearing in 1887, Sherlock Holmes and his loyal friend and biographer, Dr. John Watson, continue to be two of the most popular detective characters of all time. Who, then, could be better companions to accompany you on this three-challenge puzzle adventure, inspired by these six classic Sherlock Holmes short stories?This illustrated edition includes:Hours of fun and entertainment await you inside!

The Puzzlecraft series from Wellfleet Press tackles some of the greatest conundrums of our time. Learn how to navigate the world’s trickiest mazes, solve the most complex crosswords, and finally get the answer to “Why is a raven like a writing desk?” Follow literature’s most famous detective, Sherlock Holmes, as he guides you through hundreds of challenging cross-fitness brain exercises inspired by his most popular cases and adventures. You can also train your memory to perform better and learn the meanings behind your own personality traits or the traits of others. These handy and portable paperbacks are sized perfectly to travel, whether on vacation or just for your daily commute. The intricately designed covers and bold colors will capture your attention as much as the engaging content inside.

Pierre Berloquin is a writer; creator of puzzles, board games, and multimedia games; designer; and a creative consultant. After studying at the École des Mines in Paris, France, he worked as an engineer, consultant, and professor while quickly becoming a renowned specialist of logical and mathematical games. Pierre has written over 50 books of puzzles, many of which are bestsellers.

Bernard Myers was born in 1944 at Bletchley, England, from a French mother and a British father. As soon as peace arrived, the family moved to France where Bernard went to school until the age of ten, when he went to a boarding school in England. After university, he returned to Paris, where he married and had three children. Bernard worked for a while as scriptwriter and translator but moved on to his great passion, games and puzzles. He published various books, notably Supermazes in the US. He then launched his own publishing company and created a logic puzzle magazine, Spécial Logique. Meanwhile, he also wrote over fifty puzzle books for all ages. Now officially retired, he continues, nevertheless to invent puzzles.