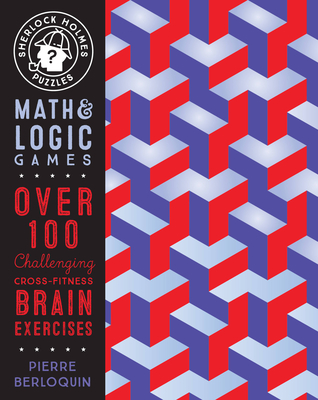 This is book number 6 in the Puzzlecraft series.

Boost your brain power and detox from the digital deluge with over 100 math and logic puzzles with the greatest riddle solver of all time, Sherlock Holmes.

The mind-sharpening puzzles include monograms, which strengthen your deductive powers as you correctly fill in a grid to produce a picture; logic puzzles, which engage your deductive skills to figure out the rules of a maze; syllogisms, in which you are given a list of premises to figure out what can be deduced from them; and logic grid puzzles, in which a scenario is given and you fill out a matrix with the clues to deduce the solution.

Each book in the Sherlock Holmes Puzzles series (part of the larger Welfleet Puzzlecraft series) presents 100+ challenging cross-fitness brain exercises inspired by literature's most famous detective of all time, Sherlock Holmes, in popular brain game formats to get your digital detox started and your mind in shape. The games are not only entertaining, but also:
The Puzzlecraft series from Wellfleet Press tackles some of the greatest conundrums of our time. Learn how to navigate the world’s trickiest mazes, solve the most complex crosswords, and finally get the answer to “Why is a raven like a writing desk?” Follow literature’s most famous detective, Sherlock Holmes, as he guides you through hundreds of challenging cross-fitness brain exercises inspired by his most popular cases and adventures. You can also train your memory to perform better and learn the meanings behind your own personality traits or the traits of others. These handy and portable paperbacks are sized perfectly to travel, whether on vacation or just for your daily commute. The intricately designed covers and bold colors will capture your attention as much as the engaging content inside.

Pierre Berloquin is a writer; creator of puzzles, board games, and multimedia games; designer; and a creative consultant. After studying at the École des Mines in Paris, France, he worked as an engineer, consultant, and professor while quickly becoming a renowned specialist of logical and mathematical games. Pierre has written over 50 books of puzzles, many of which are bestsellers.