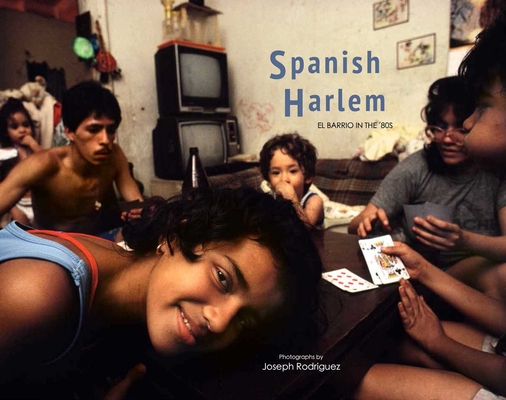 
Backordered
When Brooklyn-raised photographer Joseph Rodriguez first debuted his body of work shot in Spanish Harlem in the 1980s, it changed the face of documentary photography. Grit, elegy, celebration, pride, lurking cataclysm-all embedded in the portrait of a place and the people. Now, three decades later, Rodriguez and powerHouse Books are revisiting that groundbreaking series: unearthing huge new caches of images, and re-editing and showcasing the body of work in a beautiful, deluxe monograph, reframing the project as one that pushed beyond documentary into the realm of fine art. Over 30 years since the project began,Spanish Harlem: El Barrio in the 80sfinally brings this unparalleled endeavor to fruition.

Spanish Harlem, New York's oldest barrio, is the U.S. mecca where Puerto Ricans first established themselves in the 1940s. One of America's most vital centers of Latino culture, Spanish Harlem is home to 125,000 people, half of whom are Latino. Shot in the mid-to-late 80s, Joseph Rodriguez's superb photographs bring us into the core of the neighborhood, capturing a spirit of a people that survives despite the ravages of poverty, and more recently, the threat of gentrification and displacement. In a now-distant landscape littered with abandoned buildings, ominous alleyways, and the plague of addiction, the residents of Spanish Harlem persevered with flamboyant style and gritty self-reliance.

"His Kodachrome photographs tell stories of a community that persevered and even flourished in the face of addiction, urban decay, and, eventually, gentrification."
— Artnet

"Rodriguez shows himself to be a compassionate and astute chronicler of the quotidian experiences of the people he photographs. The spontaneous quality that suffuses many of his images belies a far more intricate and dedicated photographic process honed over the years he spent in El Barrio."
— Art in America

"They don't come more New York than Joseph Rodriguez."
— It's Nice That

"...unearthing huge new caches of images, and re-editing and showcasing the body of work in a beautiful, deluxe monograph, reframing the project as one that pushed beyond documentary into the realm of fine art."
— F-Stop Magazine

"Whether it be wild street parties or impoverished tenement families crammed into a single room, the full spectrum of life in East Harlem was preserved by Rodriguez's film work."
— Gothamist

"These photos of Spanish Harlem in the 1980s, show the lush, tough life of a vibrant neighborhood."
— Timeline

"The rough and the ready of 1980s Spanish Harlem captured in all its tenaciousness by documentary photographer Joseph Rodriguez."
— WeHeart

"What's beautiful about Rodriquez's work - besides the rawness, grit and vibrance of the tableaus he paints - is that his work simultaneouslyglorifies the past and celebrates the Harlem that still exists today."
— Creative Review