Toward a Poetics of Genesis 1-11: Reading Genesis 4:17-22 in Its Near Eastern Context (Bulletin for Biblical Research Supplement #7) (Hardcover) 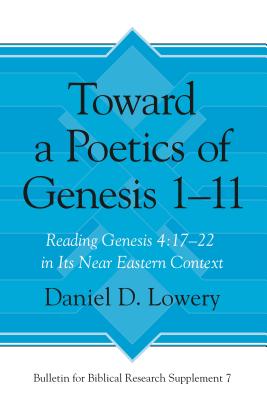 Toward a Poetics of Genesis 1-11: Reading Genesis 4:17-22 in Its Near Eastern Context (Bulletin for Biblical Research Supplement #7) (Hardcover)

Daniel Lowery commences this work by suggesting that history is a subjective enterprise--it is controlled by those who record it. The power of the present decides what is counted as history, and how the rest of us are told about the past shapes our view of it and, concomitantly, our outlook for the future. In this sense, then, history fundamentally shapes the future. Few questions are more basic to human existence than Who am I? Where did I come from? What is my place in this world? The earliest chapters of Genesis have oriented hearers and readers for millennia in their attempts to address these concerns. And so, in several respects, Genesis shapes the future. In this study, Lowery sets out to understand more accurately ancient Near Eastern language and claims about origins, specifically claims found in Gen 1-11. He uses Gen 4:17-22 as a test case representing the Hebrew tradition explaining how the world came to be civilized. Lowery observes that this passage serves a function within the larger narrative of Gen 1-11 akin to other ancient Near Eastern traditions of civilized beginnings. Moreover, it occupies a place in the overarching "narrative of beginnings" corresponding to what we find elsewhere throughout the ancient world. Lowery focuses mainly on Mesopotamia, leaving other cultures for later study. This study aims to demonstrate that much of the language of Gen 1-11 is similar in many ways to its Mesopotamian counterparts. More explicitly, here is an exploration of the nature of the language and terms of Gen 1-11 to ascertain what truths it communicates and how it communicates them. At its core, this is a study of the genre and generic claims of protohistory as found in Gen 1-11.