Warthog: Flying the A-10 in the Gulf War (The Warriors) (Mass Market) 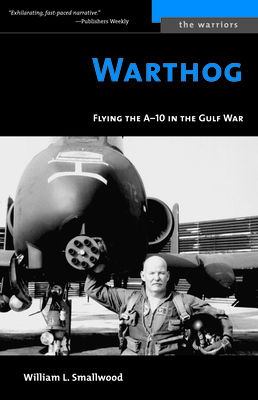 Warthog: Flying the A-10 in the Gulf War (The Warriors) (Mass Market)


Not On Our Shelves—Ships in 1-5 Days
A valentine for one of the ugliest, albeit most lethally effective, warplanes ever built--as well as for the men who flew them during the Desert Storm campaign. Drawing on interviews with over one hundred A-10 pilots who served in the Persian Gulf during the 1990-91 hostilities, Smallwood (himself an aviator and Korean War vet) offers riveting perspectives on aerial combat. Setting the stage with an informative briefing on how, in the 70's, the Air Force developed the A-10 (a.k.a. ``Warthog'') as a means of supporting ground troops with massive firepower, he moves into anecdotal vignettes detailing the ways in which so-called ``hog drivers'' and their commanders whiled away the weary hours of the calm before the storm in Saudi Arabia's inhospitable clime. At the heart of his narrative, however, are vivid accounts of how A-10s accomplished their tank-busting missions and then some once the battle was joined. Tasked, among other objectives, to take out missile launchers and artillery emplacements far behind the front lines (assignments normally reserved for jet fighters), the slow-moving, heavily armed Warthogs were credited with over half the bomb damage inflicted on Iraqi forces and installations. Employing improvisational tactics, A-10s also flew reconnaissance and assisted in rescues of coalition pilots; they even scored air-to- air kills, downing a couple of enemy choppers. Indeed, the plane's ungainly Gatling-gun platform performed so well that pilots demanded their craft be redesignated ``RFOA-10'' (for ``reconnaissance/fighter/observation/attack'').
“Exhilarating, fast-paced narrative.”—Publishers Weekly


“One of the more valuable additions to the literature of the Persian Gulf War.”—Booklist


“An absorbing tale of how a decidedly ugly duckling became a military hero of some consequence.”—Kirkus Reviews


“Smallwood writes so well that we feel the sweat in the small of our backs and the adrenaline pumping.”—F. Clifton Berry Jr. and author of CNN: War In the Gulf


“A fitting tribute.”—Stephen Coonts, author of Flight of the Intruder


“As fascinating a flying tale as you will ever read, and it’s all true.”—Mark Berent, author of Steel Tiger