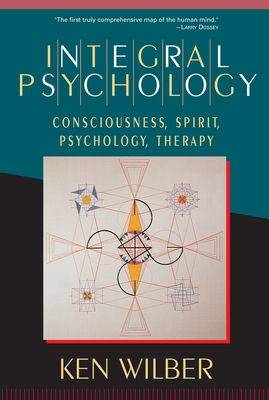 The goal of an “integral psychology” is to honor and embrace every legitimate aspect of human consciousness under one roof. Drawing on hundreds of sources—Eastern and Western, ancient and modern—Wilber creates a psychological model that includes waves of development, streams of development, states of consciousness, and the self, and follows the course of each from subconscious to self-conscious to superconscious.

Included in the book are charts correlating over a hundred psychological and spiritual schools from around the world, including Kabbalah, Vedanta, Plotinus, Teresa of Ávila, Aurobindo, Theosophy, and modern theorists such as Jean Piaget, Erik Erikson, Jane Loevinger, Lawrence Kohlberg, Carol Gilligan, Erich Neumann, and Jean Gebser. Integral Psychology is Wilber's most ambitious psychological system to date and is already being called a landmark study in human development.

Ken Wilber is the author of over twenty books. He is the founder of Integral Institute, a think-tank for studying integral theory and practice, with outreach through local and online communities such as Integral Education Network, Integral Training, and Integral Spiritual Center.

"One of the most important thinkers of our age, and certainly the leading authority in the field of transpersonal psychology . . . The scope of his scholarship and of his understanding of the psychological development of the individual from early body awareness to the higher (and ultimately non-dual) experiential levels is quite simply breathtaking."—The Middle Way

"The first truly comprehensive map of the human mind."—Larry Dossey, author of Be Careful What You Pray For . . . You Just Might Get It

"Ken Wilber is a national treasure. No one is working at the integration of Eastern and Western wisdom literature with such depth or breadth of mind and heart as he."—Robert Kegan, Professor of Education, Harvard University Graduate School of Education, and author of In Over Our Heads

"In ages to come, historians may well view Wilber's work as the pivotal insight that legitimized the return of consciousness and spirit to our age. For this exciting page-turner, psychology owes him a millennial debt."—T. George Harris, founding editor, Psychology Today and American Health

"In a single publication Wilber strides over the entire history of psychology to create new and comprehensive strategies for human survival in the next millennium."—Don Beck, coauthor of Spiral Dyanmics

"Integral Psychology is so all-encompassing, lucid, and well written that Ken Wilber deserves the recognition of having single-mindedly brought conceptual order to psychology of the East and West."—Susanne Cook-Greuter, coeditor of Transcendence and Mature Thought in Adulthood