Dancing in the Flames: The Dark Goddess in the Transformation of Consciousness (Paperback) 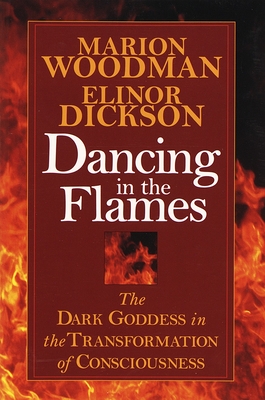 Dancing in the Flames: The Dark Goddess in the Transformation of Consciousness (Paperback)


Not On Our Shelves—Ships in 1-5 Days
Dark, earthy, and immensely powerful, the Black Goddess has been a key force in world history, manifesting in images as diverse as the Indian goddess Kali and the Black Madonnas of medieval Europe. She embodies the energy of chaos and creativity, creation and destruction, death and rebirth. Images of Her, however, have been conspicuously missing in the Western world for centuries—until now, when awareness of the Goddess is re-arising in many spheres, from the women's movement to traditional religion, from the new discoveries of quantum physics to the dreams of ordinary men and women. Why now particularly? The answer provided by Marion Woodman and Elinor Dickson is bold and thrilling: the reemergence of the Divine Feminine in our time indicates our readiness to move to an entirely new level of consciousness. The reemerging Goddess calls for a shattering of rigid categories, a willingness to hold opposition. She calls us to marry reason and order to creativity, and to embrace the chaos that can ultimately lead to wisdom and transformation on personal and global levels.
Marion Woodman is a Jungian analyst who is internationally known as a teacher, lecturer, and workshop leader. She is the author of numerous books, including Addiction to Perfection and Leaving My Father's House.
"Dancing in the Flames contains a veritable feast. . . . Powerful theoretical writing."—Psychological Perspectives

"This powerful book about the Dark Goddess is a rich and intimate exploration that brings together history, mythology, psychology, and religion. The authors have written a seed text that is wise, vigorous, and
revelatory."—Joan Halifax, author of The Fruitful Darkness

"Dancing in the Flames gives us a remarkably rich and deep knowledge of the Dark Goddess. Her hidden presence in the psyches of men and women becomes visible through Marion Woodman and Elinor Dickson's perceptive insights. Seen and unseen, appreciated or denigrated, in history, myth, and culture as well as in individuals, the Dark Goddess carries transformative power and feminine wisdom, which are revealed in this beautifully conceived book that can affect the reader like a major dream or evocative poem."—Jean Shinoda Bolen, M.D., author of Crossing to Avalon and Goddesses in Everywoman