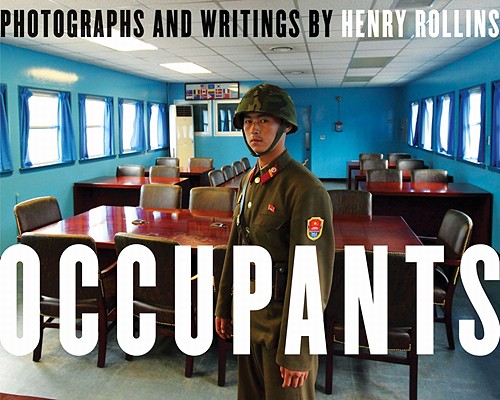 For the past twenty-five years, Henry Rollins has searched out the most desolate corners of the Earth—from Iraq to Afghanistan, Thailand to Mali, and beyond—articulating his observations through music and words, on radio and television, and in magazines and books. Though he’s known for the raw power of his expression, Rollins has shown that the greatest statements can be made with the simplest of acts: to just bear witness, to be present.

In Occupants, Rollins invites us to do the same. The book pairs Rollins’s visceral full-color photographs—taken in Bangladesh, Burma, Cambodia, India, Indonesia, Northern Ireland, Saudi Arabia, South Africa, and elsewhere over the last few years—with writings that not only provide context and magnify the impact of the images but also lift them to the level of political commentary. Simply put, this book is a visual testimony of anger, suffering, and resilience. Occupants will help us realize what is so easy to miss when tragedy and terror become numbing, constant forces—the quieter, stronger forces of healing, solidarity, faith, and even joy.

Henry Rollins joined the Southern California band Black Flag as vocalist in 1981. Upon its demise, he formed Rollins Band, and has been making records, writing books, and touring the world ever since. Rollins has averaged over one hundred shows a year for over 30 years. He also performs in movies and TV shows and hosts a weekly LA radio show.
“Punk-rock icon. Spoken word poet. Actor. Author. DJ. Is there anything this guy can’t do?”  —Entertainment Weekly

"A whirlwind of gutting impressions to global cultures, Occupants unhinges what we know about being citizens of the world while challenging our conceptions." —YRB Magazine

"It's an impressive collection built entirely out of Rollins' desire to expose readers to corners of the world they may otherwise never see." —Wired.com