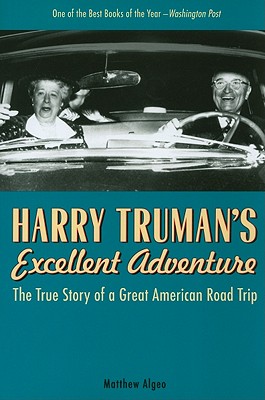 On June 19, 1953, Harry Truman got up early, packed the trunk of his Chrysler New Yorker, and did something no other former president has done before or since: he hit the road. No Secret Service protection. No traveling press. Just Harry and his childhood sweetheart Bess, off to visit old friends, take in a Broadway play, celebrate their wedding anniversary in the Big Apple, and blow a bit of the money he’d just received to write his memoirs. Hopefully incognito.

In this lively history, author Matthew Algeo meticulously details how Truman’s plan to blend in went wonderfully awry. Fellow diners, bellhops, cabbies, squealing teenagers at a Future Homemakers of America convention, and one very by-the-book Pennsylvania state trooper all unknowingly conspired to blow his cover. Algeo revisits the Trumans’ route, staying at the same hotels and eating at the same diners, and takes readers on brief detours into topics such as the postwar American auto industry, McCarthyism, the nation’s highway system, and the decline of Main Street America. By the end of the 2,500-mile journey, you will have a new and heartfelt appreciation for America’s last citizen-president.

Matthew Algeo is an award-winning journalist who has reported from three continents for public radio’s All Things Considered, Marketplace, and Morning Edition. He is the author of The President Is a Sick Man and Last Team Standing.

"One of the Best Books of the Year." —Washington Post

"Enlivened by Algeo"s endeavors to see the places where Truman stopped, this is an engaging historical sidebar."  —Booklist Online

“Algeo chronicles this unlikely excursion in great and wonderful detail. . . . [An] enchanting glimpse into a much simpler age.” --Library Journal