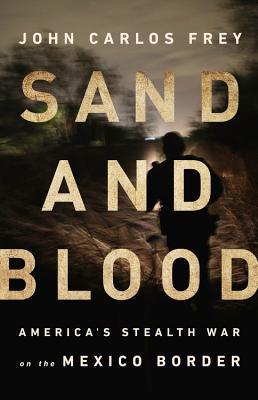 
Special Order—Subject to Availability
A damning portrait of the U.S.-Mexico border, where militaristic fantasies are unleashed, violent technologies are tested, and immigrants are targeted.

Over the past three decades, U.S. immigration and border security policies have turned the southern states into conflict zones, spawned a network of immigrant detention centers, and unleashed an army of ICE agents into cities across the country.

As award-winning journalist John Carlos Frey reveals in this groundbreaking book, the war against immigrants has been escalating for decades, fueled by defense contractors and lobbyists seeking profits and politicians--Republicans and Democrats alike--who relied on racist fear-mongering to turn out votes. After 9/11, while Americans' attention was trained on the Middle East and the wars in Iraq and Afghanistan, the War on Terror was ramping up on our own soil--aimed not at terrorists but at economic migrants, refugees, and families from South and Central America seeking jobs, safety, and freedom in the U.S.

But we are no safer. Instead, families are being ripped apart, undocumented people are living in fear, and thousands of migrants have died in detention or crossing the border.

Taking readers to the Border Patrol outposts, unmarked graves, detention centers, and halls of power, Sand and Blood is a frightening, essential story we must not ignore.

John Carlos Frey is an investigative reporter and documentary filmmaker based in Los Angeles. A five-time Emmy Award winner, he is a special correspondent for PBS NewsHour and a longtime Type Investigations journalist at the Type Media Center. His investigative work has been featured on 60 Minutes, PBS, CBS, ABC and NBC News, and in the Los Angeles Times, the Huffington Post, Salon, Need to Know online, the Washington Monthly, and El Diario. His documentary films includeThe Invisible Mexicans of Deer Canyon, The Invisible Chapel, The 800 Mile Wall, andThe Real Death Valley. He is the 2012 recipient of theScripps Howard Award, the Sigma Delta Chi award, the IRE Medal, and the Polk Award, among others, for his investigative work.
"[A] searing eyewitness report"—Foreign Affairs

"A must-read book for any American citizen interested in breaking down immigration rhetoric on both sides of the aisle...It is imperative that we come to understand the factors that drive people to cross the border...Frey's work is a crucial step in that direction."—AmeriQuests