A Year in the Woods (Hardcover) 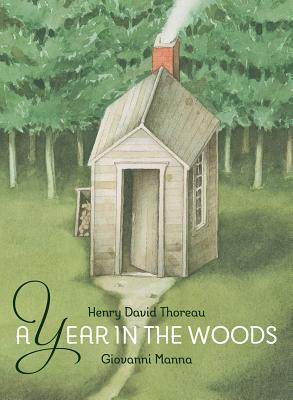 A Year in the Woods (Hardcover)


Special Order—Subject to Availability
"I learned this, at least, by my experiment: that if one advances confidently in the direction of his dreams, and endeavors to live the life which he has imagined, he will meet with a success unexpected in common hours." So concluded Henry David Thoreau in his 1854 work Walden, a collection of observations made while he lived alone in the woods near Walden Pond for two years in the 1840s. The lessons he learned have since become maxims for living fully and deliberately. Excerpts from Walden are here accompanied by idealistic, wistful paintings.
Henry David Thoreau was born in Concord, Massachusetts, in 1817. For the remaining 45 years of his life, he never strayed far from there for long, even attending college at nearby Harvard. Along with Ralph Waldo Emerson, he was a leading figure in the American Transcendentalist movement, which taught that nature and people are good at the core and that it is up to individuals to empower their lives.

Giovanni Manna was born in Florence, Italy, and has made illustrations for more than 80 books for children since 1995. His work has been featured in exhibitions throughout Italy and internationally, from Bratislava to Britain. He was awarded the Andersen Prize for best Italian illustrator in 2003. This is his second book for Creative Editions.