Zen Brushwork: Focusing the Mind with Calligraphy and Painting (Paperback) 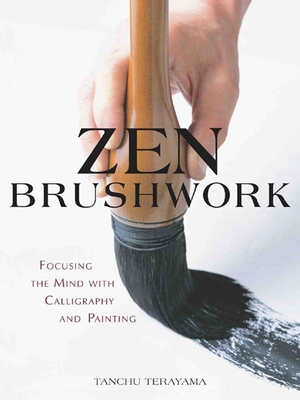 Zen Brushwork: Focusing the Mind with Calligraphy and Painting (Paperback)


Special Order—Subject to Availability
With its bold strokes and mystic aura, Zen calligraphy has fascinated Westerners for decades, yet it remains an abstract, rarely practiced form of expression outside of Asia. Now, master calligrapher Tanchu Terayama explains the techniques behind this subtle art and offers step-by-step instructions for practicing it on a professional level.


After introducing the basics, Terayama presents a unique meditative warm-up to establish the proper mental attitude needed to release one's creative energies. Next, the power of the brushed line is explained and demonstrated. What makes a good line or a bad one, an expressive effort or an unfocused one? Lessons on brushing symbolic Japanese characters follow, including those for "emptiness," "nothingness," and "flower." The painting section shows readers how to draw the spare yet elegant pictorial themes of this classic art: bamboo, plum blossoms, Mount Fuji, and the inspirational Zen priest Daruma.


If the exercises are the heart of the book, the Appreciation section is the soul. This chapter introduces classic works from renowned priests and other historical figures, including Miyamoto Musashi (the celebrated swordsman and author of The Book of Five Rings), Morihei Ueshiba (the founder of aikido), Jigoro Kano (the father of judo), and Zen priest Hakuin. Each masterpiece is accompanied by penetrating commentary on the strengths and salient features of the work.


Rarely has Zen calligraphy been demonstrated and discussed with such candor and insight. Illuminating yet another side of Zen, Zen Brushwork will be an invaluable source to those interested in meditation, Zen, Buddhism, the martial arts, and Oriental traditions in general.


What is Zen Calligraphy?


Calligraphy (sho) is a formative art based on writing. It includes not only writing that is beautiful, but phrases that are novel and interesting. According to the Japanese philosopher Nishida Kitaro (1870-1945; see figure 1), true creativity is not the product of a conscious effort but rather the "phenomenon of life itself." True creation must arise from mu-shin, or the state of "no-mind," a state beyond thought, emotions, and expectations. Work that is produced through conscious effort is ultimately devoid of life.


Zen calligraphy in particular must spring from shonen sozoku, a Buddhist term equivalent to "true thought." Shonen is a state of full concentration that is devoid of thoughts and ideas, while sozoku here means "free-flowing continuity." Greatness in brushwork cannot be achieved through conscious effort; it is only achieved through the states of mu-shin and shonen sozuku, or "no-mind" and a continuous state free of the thoughts and ideas that distract the mind.


Zen calligraphy differs from other calligraphic disciplines as it is focused on the realization of "no-mind." Furthermore, in contrast tosho, which uses Chinese characters as a basis, it is the expression of Zen through a brush, whether the result is a single stroke, a Zen circle, or an ink painting. While sho is restricted to brushed writing, Zen calligraphy extends to other forms of brushwork.


Nearly all calligraphy today is born of conscious attention to an aesthetic concept, but we rarely find lines that are truly alive. In contrast, the calligraphy of Zen masters such as Daito Kokushi (1282-1337; founder of Daitokuji temple in Kyoto) or Ikkyu Sojun (1394-1481) resonates with the energy of "no-mind" achieved through complete concentration. In these works, the lines are filled with vitality and the shapes are fresh and original.


Sen no Rikyu (1522-91), who established many of the basic precepts of the tea ceremony, held that nothing surpassed Zen calligraphy as a subject for display in the alcove of the tea room. He undoubtedly felt that only art works that reflect the eternal vitality of Zen writings could encourage the mind toward enlightenment.


Rikyu recognized that calligraphy necessarily demands the highest level of spirituality. A line that manifests clarity cannot be drawn if the heart is clouded by worldly concerns; a stroke cannot be brushed with resolution if the heart is agitated; and calligraphy that reveals depth cannot be produced if cultivation and experience are shallow.


To write kanji characters that resonate and demonstrate their deeper meaning, one's own mind must achieve unity with the meaning of the words-a requirement that calls for a higher level of spirituality. The calligrapher, therefore, must strive for the state of "no-mind" through meditation and contemplation.
TANCHU TERAYAMA is a professor at Nishogakusha University and the co-author of Zen and the Art of Calligraphy. His collection of historic calligraphy was the subject of an exhibition at the Victoria & Albert Museum in London.


THOMAS F. JUDGE is a Japanese-English translator now based in the San Francisco area. He has lived in Kanazawa, Osaka, and Tokyo, where he pursued his interest in Japanese crafts. He is the author of Edo Craftsmen: Master Artisans of Old Tokyo, a look at living craftspeople working in traditional crafts.


JOHN STEVENS is Professor of Buddhist Studies, as well as Aikido Instructor, at Tohoku Fukushi University in Sendai, Japan. He has been associated with Tanchu Terayama for nearly thirty years and has written a biography of Yamaoka Tesshu, The Sword of No-Sword, as well as many other books on various aspects of Asian culture.