The Unknown Craftsman: A Japanese Insight into Beauty (Paperback) 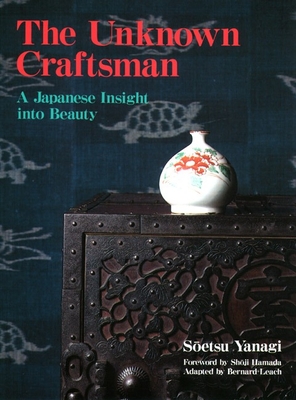 The Unknown Craftsman: A Japanese Insight into Beauty (Paperback)


Not On Our Shelves—Ships in 1-5 Days
This book challenges the conventional ideas of art and beauty. What is the value of things made by an anonymous craftsman working in a set tradition for a lifetime? What is the value of handwork? Why should even the roughly lacquered rice bowl of a Japanese farmer be thought beautiful? The late Soetsu Yanagi was the first to fully explore the traditional Japanese appreciation for "objects born, not made."

Mr. Yanagi sees folk art as a manifestation of the essential world from which art, philosophy, and religion arise and in which the barriers between them disappear. The implications of the author's ideas are both far-reaching and practical.

Soetsu Yanagi is often mentioned in books on Japanese art, but this is the first translation in any Western language of a selection of his major writings. The late Bernard Leach, renowned British potter and friend of Mr. Yanagi for fifty years, has clearly transmitted the insights of one of Japan's most important thinkers. The seventy-six plates illustrate objects that underscore the universality of his concepts. The author's profound view of the creative process and his plea for a new artistic freedom within tradition are especially timely now when the importance of craft and the handmade object is being rediscovered.
S?ETSU YANAGI was born in Tokyo in 1889 and graduated from the literature department of the Tokyo Imperial University in 1913, majoring in psychology. Proficient in English and with a deep feeling for art, while still a student Mr. Yanagi became associated with the Shirakaba ("Silver Birch") literary group, to which he was partly responsible for interpreting Western art to Japan.


In 1921, he completed the organization of a Korean folkcraft museum in Seoul, and, in 1936, the present Japan Folkcraft Museum in Tokyo was completed through his efforts.


Mr. Yanagi traveled widely in the Orient, Europe, and America. In 1929 he lectured at Harvard University for one year. In Japan, sometimes in the company of the potters Kanjir? Kawai, Sh?ji Hamada, and Bernard Leach, he sought out anonymous craftsman of all kinds throughout the country and encouraged their work. He also wrote prolifically and profoundly on all aspects of aesthetics, finding his inspiration in Japanese and Oriental folkcraft and folk culture. His personal collection of folkcrafts is the nucleus of the Japan Folkcraft Museum collection. Mr. Yanagi died in Tokyo in 1961.


The Adaptor, BERNARD LEACH today is known as one of the world's greatest potters. His numerous books are familiar to everyone interested in modem crafts. Mr. Leach first came to Japan at the age of 22, in 1909, met the Shirakaba group and soon became an intimate friend of S?etsu Yanagi. It is difficult to say which of the two men influenced the other the more. In Mr. Yanagi's own words, "Leach came to Japan... full of dreams and wonder.... It is doubtful if any other visitor from the West ever shared our spiritual life so completely". This volume is Mr. Leach's tribute to his friend of fifty years standing.
"Yanagi pinpoints qualities of 'true' beauty with an authority that hardly allows us to differ. As does Solzhenitsyn, he feels that beauty is a real entity and not different from truth." —Craft Horizons

"This book is a quiet manifesto for the preservation and enhancement of crafts." —Washington Post