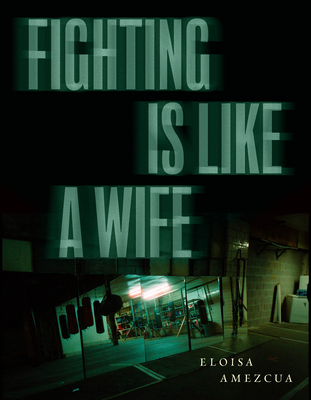 
On Our Shelves Now at:
In Fighting Is Like a Wife, Eloisa Amezcua uses striking visual poems to reconstruct the love story--and the tragedy--of two-time world boxing champion "Schoolboy" Bobby Chacon and his first wife, Valorie Ginn.

Bobby took to fighting the way a surfer takes to water: the waves and crests, the highs and the pummeling lows. Valorie, as girlfriend, then wife, then mother of their children, was proud of Bobby and how he found a way out of the harsh world they were born into. But the brain-sloshing blows, the women, and the alcohol began to take their toll, and soon Bobby couldn't hear her anymore. With her fate affixed to Bobby's, and Bobby's to the ring, Valorie sought her own way out of this dilemma. Using haunting, visceral language to evoke the emotion of the fight, and incorporating direct quotations from sports commentators and Bobby himself, Fighting Is Like a Wife reveals how boxing, like love and poetry, can be brutal, vulnerable, and surprising.
Eloisa Amezcua is from Arizona. She is the author of From the Inside Quietly (2018). A MacDowell fellow, Eloisa has published poems and translations in the New York Times Magazine, Poetry Magazine, Kenyon Review, Gulf Coast, the Academy of American Poets Poem-a-Day series, and elsewhere.