A Girl Is a Half-Formed Thing (Hardcover) 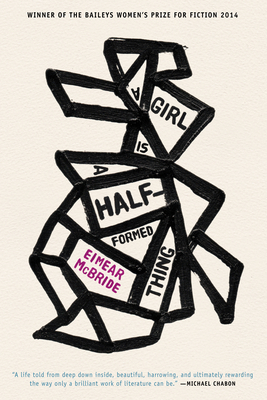 A Girl Is a Half-Formed Thing (Hardcover)

Eimear McBride is a writer of remarkable power and originality.--The Times Literary Supplement An instant classic.--The Guardian It's hard to imagine another narrative that would justify this way of telling, but perhaps McBride can build another style from scratch for another style of story. That's a project for another day, when this little book is famous.--London Review of Books In edgy, hazy, stream-of-consciousness prose, Eimear McBride transports you directly into her narrator's mind and heart, making this experimental, award-winning novel totally unforgettable.--Bustle A Girl is a Half-formed Thing is simply a brilliant book--entirely emotionally raw and at the same time technically astounding. Her prose is as haunting and moving as music, and the love story at the heart of the novel--between a sister and brother--as true and wrenching as any in literature. This is a book about everything: family, faith, sex, home, transcendence, violence, and love. I can't recommend it highly enough.--Elizabeth McCracken McBride's A Girl is a Half-formed Thing is a game-changer, a disruptor, a grenade of a novel, and we all agreed this had to win.--Isabel Berwick My discovery of the year was Eimear McBride's debut novel A Girl Is a Half-formed Thing.--Eleanor Catton Eimear McBride's acclaimed debut tells the story of a young woman's relationship with her brother, and the long shadow cast by his childhood brain tumor, touching on everything from family violence to sexuality and the personal struggle to remain intact in times of intense trauma. Eimear McBride was born in 1976 and grew up in Ireland. At twenty-seven she wrote A Girl is a Half-formed Thing and spent the next nine years trying to have it published. Perhaps no debut has been more thrilling than Eimear McBride's Girl is a Half-formed Thing.-- SF Weekly Undoubtedly my standout read of the year, A Girl is A Half-formed Thing is an exciting and innovative debut.-- Glasgow Review of Books Irish author Eimear McBride earned hosannas for her first novel with the very evocative 'A Girl is a Half Formed Thing'.-- Indian Express McBride] reframes our expectations of prose and clarifies an urgent reality: we are all half-formed, to some degree. --The Colorado Review

Eimear McBride was born in 1976 and grew up in the west of Ireland. At twenty-seven she wrote A Girl is a Half-formed Thing and spent the next nine years trying to have it published. In 2013 it was the recipient of the inaugural Goldsmiths Prize. She currently lives in the UK with her husband and daughter.