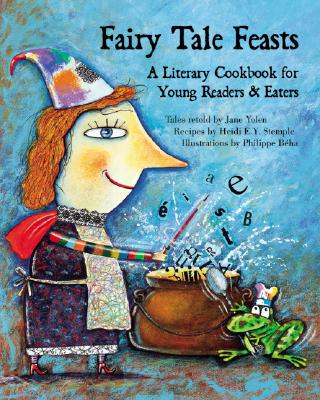 
Special Order—Subject to Availability
Fairy Tale Feasts is more than collection of stories and recipes. In it, Caldecott-winning author Jane Yolen and her daughter, Heidi Stemple, imagine their readers as co-conspirators. About the creation of the stories and the history of the foods they share fun facts and anecdotes designed to encourage future cooks and storytellers to make up their own versions of the classics.

From the earliest days of stories, when hunters told of their exploits around the campfire while gnawing on a leg of beast, to the era of kings in castles listening to the storyteller at the royal dinner feast, to the time of TV dinners when whole families sit for dinner in front of a screen to watch a movie, stories and eating have been close companions. So it is not unusual that folk stories are often about food. Jack's milk cow traded for beans, Snow White given a poisoned apple, a pancake running away from those who would eat it, Hansel and Gretel lured by the gingerbread house and its candy windows and doors. But there is something more—stories and recipes are both changeable. A storyteller never tells the same story twice, because every audience needs a slightly different story, depending upon the season or the time of day, the restlessness of the youngest listener, or how appropriate a tale is to what has just happened in the storyteller's world. And every cook knows that a recipe changes according to the time of day, the weather, the altitude, the number of grains in the level teaspoonful, the ingredients found (or not found) in the cupboard or refrigerator, even the cook's own feelings about the look of the batter.
The amazingly prolific Jane Yolen, has been called “America’s Hans Christian Andersen.” She is the distinguished author of over 300 books, including Fairy Tale Feasts, Jewish Fairy Tale Feasts, Owl Moon and Devil’s Arithmetic. She lives on an old farm in western Massachusetts with numerous moles who do not seem to be afraid of anything. She enjoys taking walks along the river near her house and visiting people, including her editors—in fact, she wrote this book in the office of one of them. Kathryn Brown has illustrated numerous highly-acclaimed picture books for children. She lives with her husband and their daughter near Jane Yolen in western Massachusetts. She did not, however, use the moles on Jane Yolen's farm as models for this book. (They were too hard to catch.)

Heidi E.Y. Stemple is a second-generation children’s book author who has published more than 30 books including Counting Birds, I Am The Storm, and Not All Princesses Dress In Pink.
“For a really nice idea wonderfully fulfilled, Yolen retells very familiar tales in versions lively, brief and energetic: Little Red Riding Hood, The Little Mermaid, Cinderella and a number of others. Her daughter, Stemple, adds recipes to each tale, sometimes with tenuous connection but always with humor. These are great recipes for French toast, carrot soup, lemon chicken, mashed turnips that are straightforward, relatively easy to make with adult and child working together and good to eat. Measurements are given in American and British amounts and possible substitutions are noted and suggested. The colorful, whimsical illustrations hit just the right note both in full-page versions and smaller vignettes for instance, ‘The Magic Pot of Porridge’ shows a small house with a roof tilted crazily due to porridge pressure. Notes on the stories and on the recipes fill sidebars, and these are clear, accurate and engaging to both young and older readers.”

“No matter the fate that awaits the fox that stole the grapes, the monk who made Stone Soup or Little Red Riding Hood, the stories in Fairy Tale Feasts: A Literary Cookbook for Young Readers and Eaters (Interlink, $24.95) have happy endings: recipes. Jane Yolen — a prolific and much-honored fantasy, science fiction and children’s author — shares 20 classic childhood stories from many parts of the globe, with a type size and brevity that invite reading aloud. Illustrated by Philippe Beha, the book includes margin notes from Yolen shedding light on the stories’ origins, alternative versions and lore about the main ingredients. The doable recipes by Yolen’s daughter, Heidi E.Y. Stemple — breakfasts to desserts, including Brer Rabbit’s Carrot Soup and Little Mermaid’s Pasta Shells — have age-spanning appeal, laying out details for equipment and serving suggestions. What else would you do after midnight with a retired coach, asks the introduction for the recipe that follows Cinderella? Make pumpkin tartlets, of course.”
— Bonnie S. Benwick

“A creative book, which folds fairy tales into a cookbook of kid-friendly recipes… Yolen retells them with her usual verve and ease… the resulting dishes, as well as Beha’s spare, whimsical spot illustrations, will capture children’s fancy. Detailed marginalia greatly enhance both the folktales and the food sections of this charming offering that the whole family will appreciate.”

“This collection of 20 fairy tales, each accompanied by at least one recipe, is an oversized, glossy concoction. Most of the stories are European, told in a conversational tone mixing tradition with a dash of the modern (in Cinderella, for instance, …a fairy-with wings and a wand and who knew a wish when she heard it-appeared before her, wrapped in stars.) Toddlers will enjoy The Runaway Pancake, while fourth and fifth graders will appreciate Yolen’s Snow White (this heroine doesn’t pull any punches). The recipes include tasty-sounding dishes like Very French Toast (to go with the French folktale Diamonds and Toads). Breakfast, lunch, dinner, and dessert are all represented. The dishes will be best for experienced cooks, as some judgment calls are in order (serves a family is stated several times). Sidebars throughout give interesting facts about the stories and the recipes. Yolen’s knowledge of folklore shows in her tidbits about the tales and their origins. Many of the food facts are intriguing, too. For instance, alongside the Stone Soup recipe is a note that Al Capone set up Chicago’s first soup kitchen. Beha’s illustrations, with bright colors and bold, simple lines, are set off by lots of white space, adding to the appealing and accessible look. A fun book for family sharing.”

“Kids and parents will find it an outstanding collection. Fairy Tale Feasts: A Literary Cookbook for Young Readers & Eaters pairs recipes by Heidi E.Y. Stemple with tales retold by Yolen and illustrations by Philippe Beha. The food focus provides a lively collection pairing sidebars about the stories’ creation and food history with recipes and classics.”

“Fairy Tale Feasts, by the esteemed Jane Yolen and her daughter Heidi E.Y. Stemple, is billed as ‘A Literary Cookbook for Young Readers and Eaters’ — and that’s precisely, deliciously, what it is. Jane and Heidi look at food in folklore and fairy tales, throw in some magical recipes, and round out the book with charming illustrations by Philippe Beha.”

“Highly Recommended…Entertaining…Like a recipe book, Fairy Tale Feasts is divided into five parts: Breakfasts, Lunches, Soups, Dinners and Desserts. Twenty folktales, including old favorites such as “The Runaway Pancake,” “Little Red Riding Hood,” “Stone Soup,” “Jack and the Beanstalk,” and “Cinderella” all make their appearance, simply and charmingly told by Yolen, whose graceful prose seems exactly right for each tale. The mother daughter team has had fun matching up recipes with stories. The dishes are cleverly connected to the tales. Ingredients and methods are clearly set out…Each tale is short enough to leave time for both reading and a cooking. Yolen has produced notes set in the margins of the stories to inform young readers where the story has come from and how it has traveled. There is also marginalia on each recipe page giving interesting background and facts about the foods being prepared. In fact, there is a tremendous amount of information on food and folktales to be found in the pages of Fairy Tale Feasts. Reading these snippets of information is likely to slow down the production of any given dish, but the ensuing discussion would be well worth the time. It is not a book to be hurried through. Philippe Beha’s bold, splashy, brightly-colored watercolors enliven the pages of this volume. His paintings have a quirky humor which complements the tone and the content of this feast of fairy tales perfectly… this attractive book would make a great gift for parents or grandparents to share with five to nine year-olds.”

“What’s a good story without food for the heroes? Each recipe in this book comes with a short folk or fairy tale that includes the recipe at some point in the story. With whimsical illustrations, this book features recipes such as the runaway pancake, Little Red Riding Hood’s deviled eggs and actual stone soup made with a boiled rock. If you need an excuse to introduce new foods at home, wait no longer!”