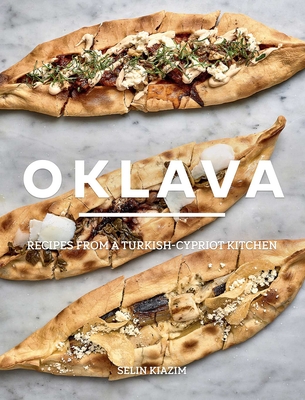 
Not On Our Shelves—Ships in 1-5 Days
With influences from the Mediterranean, Southern Europe, and the Middle East, Turkish-Cypriot food offers incredible flavor combinations unique to its region. Oklava: Recipes from a Turkish–Cypriot Kitchen celebrates the culinary delights of this area in a way no cookbook has done before. Oklava translates simply as “rolling pin.” For Selin Kiazim, this word conjures up memories of her Turkish-Cypriot grandmother: a rolling pin was never far from her hands, which meant a delicious treat was imminent. The same can be said for this book. These sensational recipes will take you on a journey from home-cooked meals and summers spent in Northern Cyprus to an exciting interpretation of modern Turkish-Cypriot cooking at home. Bring the Oklava experience into your home with Turkish delights such as Pistachio crusted Banana & Tahini French Toast with Orange Blossom Syrup and Smoked Bacon; Barbecued Chicken Wings with Garlic and Kayseri Pastirma Dressing; Zucchini, Feta & Mint Fritters; Crispy Pomegranate-Glazed Lamb Breast with Yogurt; Chili-Roasted Cauliflower; and Chocolate, Prune & Cardamom Delice.
Selin Kiazim developed her love of cooking at an early age, and her food takes inspiration from her Turkish-Cypriot heritage, focused around communal eating. Selin has worked for acclaimed chef Peter Gordon at The Providores in London, later becoming head chef at Kopapa, before taking up residency at Trip Kitchen. She opened her restaurant Oklava with her business partner Laura Christie in London's trendy Shoreditch neighborhood in November 2015.
"Welcome to an extremely tasty world of modern Turkish-Cypriot food- what a stunning and beautiful book." -
— Peter Gordon