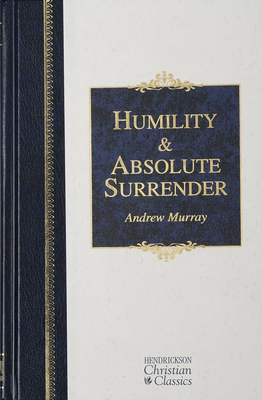 
Not On Our Shelves—Ships in 1-5 Days
For over a century countless readers have found in Andrew Murray a trustworthy guide to the deeper Christian life. As a pastor, evangelist, educator, and writer driven by concern for the spiritual guidance of new converts--and for revival in long-time believers--Murray penned some of the most enduring devotional classics of Christian literature. Though he ministered in a deeply-divided nation, his vision seemed blind to race, class, or political persuasion. And from a remote corner of South Africa, his preaching, teaching, and writing would eventually fuel spiritual awakening with a worldwide impact.

This edition pairs Humility and Absolute Surrender in one volume. Together these classics reflect Murray's longing for a closer walk with Christ, and call us to a life of holiness and virtue, empowered not by our own strength but by the indwelling Holy Spirit.
Andrew Murray (1828-1917) lived and ministered as both a pastor and a writer from the towns and villages of South Africa. Originally written in Dutch, his books were translated into English. As his popularity grew, Murray's books found their way into more than twelve foreign languages during his lifetime.